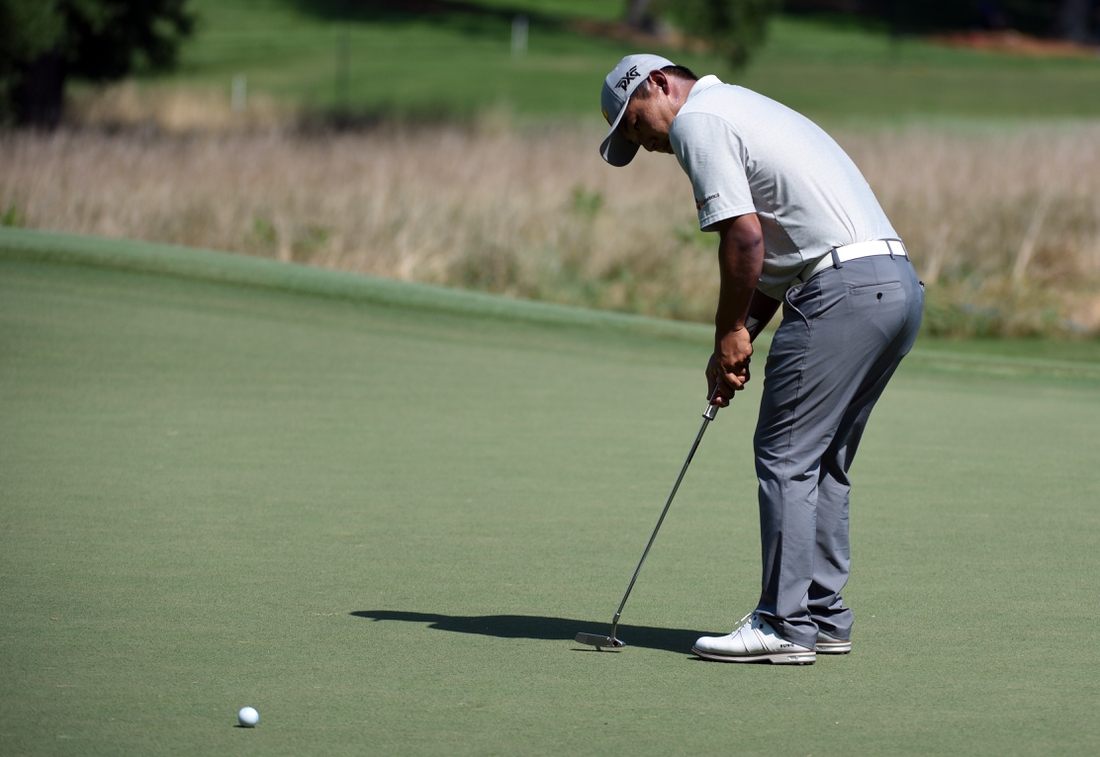 Sung Kang of South Korea sank an 18-foot eagle putt on his final hole of the first round Thursday to post a 10-under 61 and take a two-stroke lead at the Shriners Children’s Open at TPC Summerlin in Las Vegas.

Charley Hoffman, Chad Ramey and South Korean Sungjae Im are tied for second at 8-under 63.

After starting his round with five birdies on the back nine, Kang wrapped up at the par-5 ninth hole, where he drove the green in two to set up his eagle. He tallied nine birdies and one bogey on the day.

“I didn’t hit my drive good and I was in the bunker and the ball was a little below my feet,” Kang said. “And then I carry a 7-wood, which is big advantage, so my caddie told me 7-wood was perfect club. Tried to hit a little bit of draw and hit it clean, landed in a perfect spot and rolled up about (18) feet.”

Im also eagled the ninth after he nestled his second shot inside 8 feet of the pin. However, his main highlight was a run of five straight birdies on Nos. 12-16 to reach 8 under. The 29th-ranked player in the world is also in search of his second PGA Tour win.

Ramey, a PGA Tour rookie, racked up seven birdies on the back nine to score a 29. He nearly holed out from a greenside bunker for eagle at No. 16, then ended his day with a 14-foot birdie at the last.

As he got rolling on the back nine, which included a five-birdie stretch, Ramey reminded himself not to let up.

“Everybody out here obviously can play and take it deep and when you get a little bit of momentum on your side, just don’t be scared and keep your foot on the gas,” Ramey said.

Hoffman, a 44-year-old tour vet who has played TPC Summerlin plenty in his career, knows birdies are harder to come by when the desert wind starts to blow.

“You got to hit the fairways, I was able to hit a few fairways and I was able to attack on those holes and I’ve been out here — I went to college out here in ’95, so this is not my first time around this golf course and the greens were somewhat receptive and rolling smooth this morning so I was able to make some birdies.”

Adam Schenk, Talor Gooch, Chesson Hadley, Matthew Wolff and Australia’s Matt Jones shot 7-under 64 to join a tie for fifth. Japan’s Hideki Matsuyama and South Africa’s Louis Oosthuizen were part of a logjam at 6-under 65.

Tour rookie Hayden Buckley landed his tee shot at the 176-yard, par-3 17th right in front of the cup, and after two bounces it dropped for a hole-in-one. Buckley finished with a 5-under 66.

Defending champion Martin Laird of Scotland had a 4-under 67.