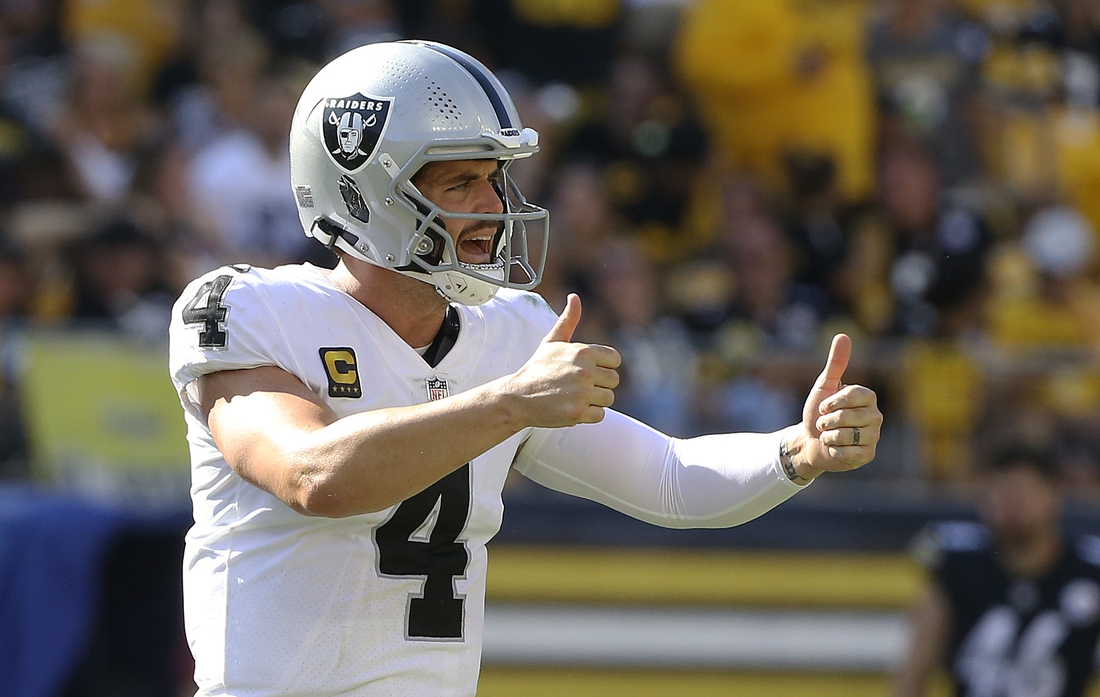 Derek Carr leads the NFL in passing yards while guiding the Las Vegas Raiders to the franchise’s first 3-0 start since 2002.

However, the opposing Los Angeles Chargers (2-1) possess the “gangster quarterback” in Justin Herbert when the teams square off in the latest edition of their rivalry on Monday night in Inglewood, Calif.

Carr passed for 1,203 yards and six touchdowns against two interceptions while being named AFC Offensive Player of the Month for September. Las Vegas leads the NFL in total offense (471.0 yards per game) and is tied for sixth in scoring offense (30.0 points per game).

Carr, 30, has thrown two touchdown passes in all three games. He has exceeded 300 passing yards in all three, topped by 435 against the Baltimore Ravens in the opener.

“We’re able to take more chances,” Carr said Thursday during his media availability. “We have thrown the ball downfield a lot. … I’ve felt in command of this offense for the past two or three years.”

The potent offense was without standout runner Josh Jacobs for the past two games. Jacobs (ankle) returned to practice on a limited basis Thursday and is expected to be a game-time decision.

Herbert set the NFL rookie record of 31 touchdown passes last season, and his status took another leap last Sunday when he tossed four scoring passes as the Chargers recorded a 30-24 road win over the Kansas City Chiefs. He connected with Mike Williams on the decisive 4-yard scoring pass with 32 seconds left while outdueling Chiefs superstar Patrick Mahomes.

That prompted Los Angeles coach Brandon Staley to become a bit exuberant in his description of Herbert.

“We’re fortunate we have a gangster quarterback,” Staley said. “He made some incredible throws with guys right on him. He certainly came through for us.”

Asked to elaborate on the gangster quarterback term a few days later, Staley said: “I don’t throw it around loosely. When I say that, I mean it. For people in football and people that watch sports, competition, it has a certain implication. It’s a good one.”

Herbert has passed for 956 yards and six touchdowns against three interceptions for the Chargers, who rank ninth in total offense (394.7) but are tied for 19th in scoring (22.3).

Herbert injured his passing hand against the Chiefs but wasn’t listed on the team’s injury report on Thursday. He is focused on a tough clash against a division foe.

“The Raiders have great athletes on defense, and they’re very well-coached,” Herbert said. “They’re playing really good football now, and we need to be at our best if we’re going to have any chance come Monday.”

Last season, Herbert passed for 640 yards and four touchdowns in his first two matchups against the Raiders as the teams split the two contests.

Las Vegas coach Jon Gruden is impressed with what he’s seen of Herbert.

“They’ve had it going on offense for a while since Herbert showed up,” Gruden said on Thursday. “Philip Rivers had a great run (with the Chargers). They’ve been a good offensive team seems like every year. …

“The quarterback is a great player. He really is something else to watch.”

One interesting aspect is that first-year Raiders defensive coordinator Gus Bradley ran the Chargers’ defense last season, so he saw a lot of Herbert on the practice field as well as in games.

The offensive firepower in Monday night’s game has led to lopsided action on the 51.5-point Over/Under, with 78 percent of the money and 74 percent of the total bets at PointsBet supporting the Over.

Chargers defensive end Joey Bosa (foot, ankle) was a full practice participant on Thursday, a good sign for the three-time Pro Bowler with 49 sacks in 66 career games. Receiver Keenan Allen (ankle) and safety Derwin James (toe, shoulder) were among the Chargers who were limited.

Defensive tackle Solomon Thomas (knee) was among the Las Vegas players who were limited on Thursday. He leads the Raiders with 2.5 sacks.