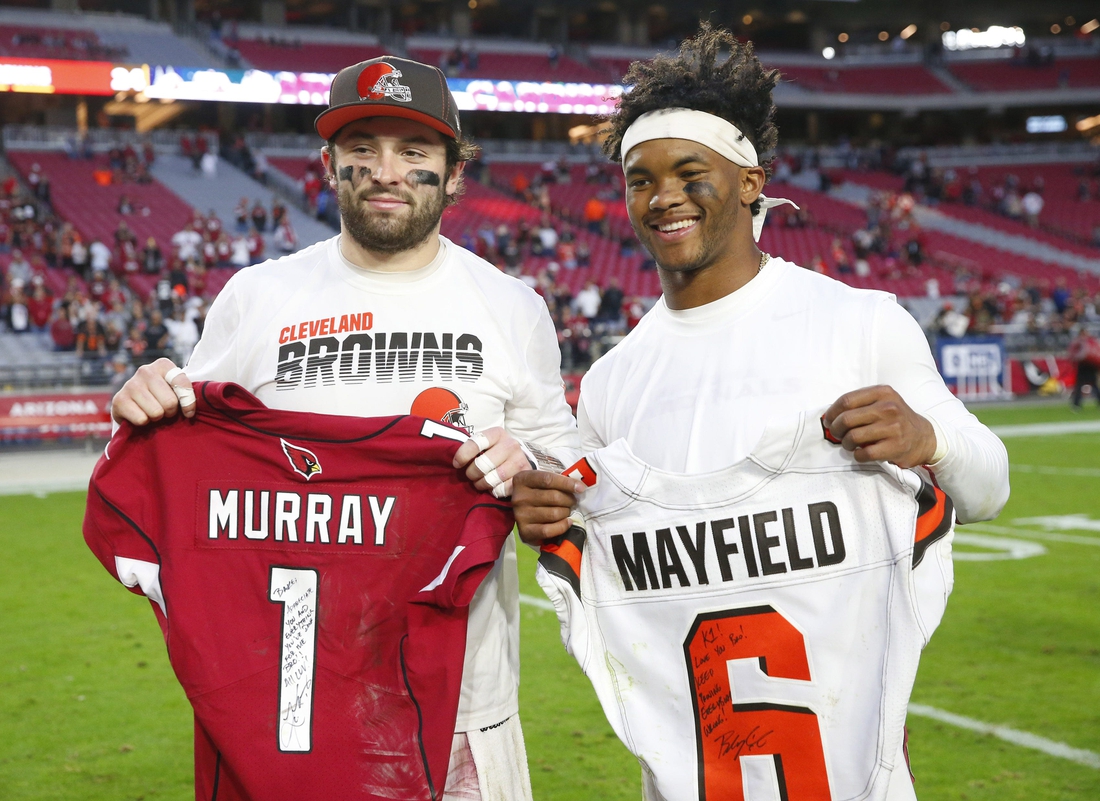 Former No. 1 overall draft picks and college teammates, Kyler Murray and Baker Mayfield, square off for the second time in three years when the undefeated Arizona Cardinals visit Cleveland to take on the Browns on Sunday.

Mayfield, the 2017 Heisman winner and top pick in 2018, has helped position the Browns (3-2) as a division contender in the AFC North.

They were once on the same roster and in the same quarterback room at Oklahoma. Mayfield and Murray won the biggest individual trophy in the sport in back-to-back seasons.

“It’s always fun when we get together, when we were together,” Murray said. “The standard was the standard. “(Mayfield) gets a lot of hate or whatever, but I watched it firsthand each and every day. How hard he works, the throws he makes. I saw it all.”

The Cardinals are having more fun than the Browns at the moment.

Arizona is the NFL’s fourth-highest scoring offense (31.4 points per game) while giving up just 19.0 points per game. The differential (plus-12.4) trails only the Buffalo Bills in the entire league.

Murray completed 70 percent or better of his passes in four straight games, has 13 total touchdowns (10 passing) overall and ranks fourth in the league with a 113.0 passer rating. With proven targets in DeAndre Hopkins (312 receiving yards, 4 TDs) and A.J. Green, and dynamite rookie Rondale Moore, Murray and the Cardinals have been one of the league’s most entertaining offenses.

Offensively, so are the Browns. Mayfield posted season highs of 305 yards, two touchdowns, and a 122.5 rating last week, but Cleveland dropped an offense-fueled 47-42 decision at the Los Angeles Chargers.

It was the second road loss of the year for Cleveland, which has lost four straight against Arizona — including 38-24 in 2019 when the rookie Murray topped Mayfield in the desert.

Garrett was nearly the last starter left standing for Cleveland’s defense at L.A as the Browns weathered an onslaught of injuries.

The Browns listed 17 players on the injury report Wednesday, including nine who did not participate. Among those out were Chubb (calf), Hunt (wrist/knee), Garrett (knee/ankle), DEs Jadeveon Clowney (knee/elbow) and Takkarist McKinley (ankle/knee), and starting OLs Jack Conklin (knee) and J.C. Tretter (knee).

Cleveland coach Kevin Stefanski was upbeat about his personnel despite that list. WR Jarvis Landry, who has missed three games, even took part on a limited basis on Wednesday.

“With Jarvis, we’ll see where it goes,” Stefanski said. “We’re not ruling anyone out.”

The Cardinals lost TE Maxx Williams with a season-ending knee injury on Sunday, placed LB Ezekiel Turner (shoulder) on IR on Tuesday, and put OLB Chandler Jones (and his team-high 5.0 sacks) on the reserve/COVID-19 list on Tuesday. Neither Turner nor starting center Rodney Hudson (ribs/shoulder) are expected to play this week.

The matchup figures to be one of the showcase games in the league. Murray said it’s just one of 17.

“There’s no stakes, it’s a regular season game,” he said. “Our mission is to go win, and so is theirs.”