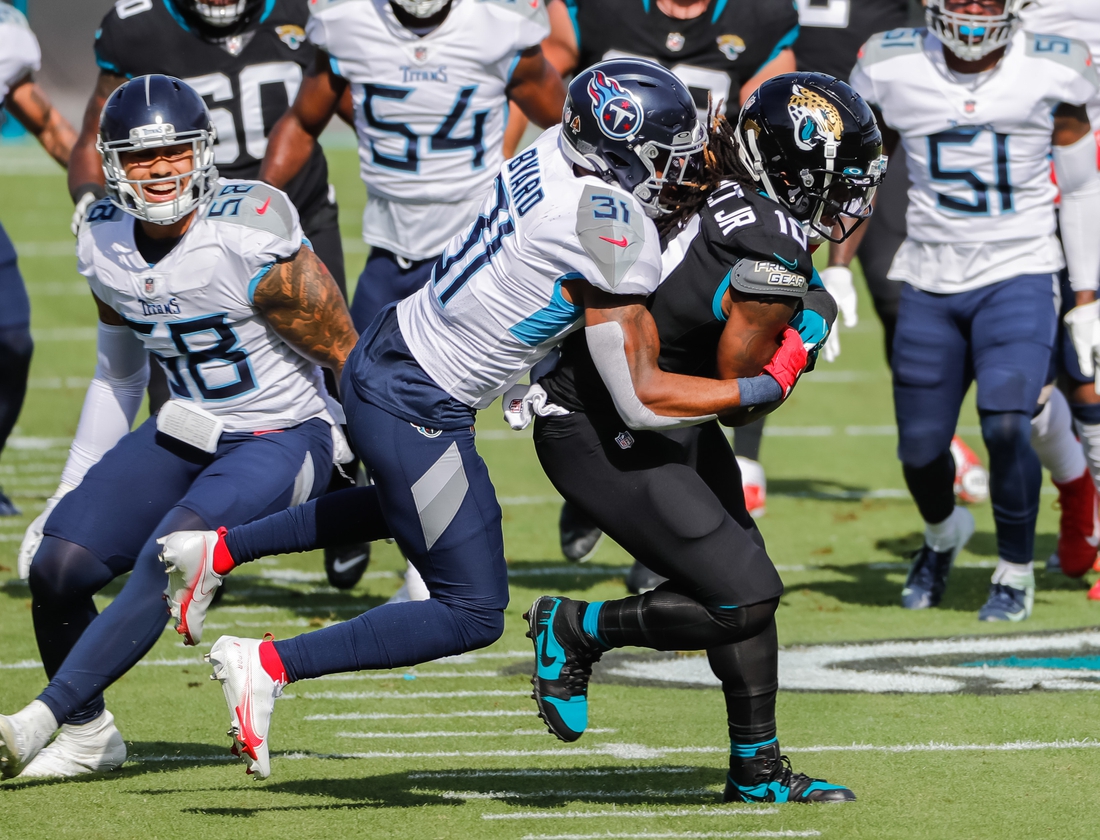 The Tennessee Titans are coming off an embarrassing overtime loss last week to the previously winless New York Jets.

The Jacksonville Jaguars have lost 19 straight games, dating back to last year. They were trending for all the wrong reasons earlier this week after a video of coach Urban Meyer, who is married, appeared to show him acting in an inappropriate fashion with a woman at his restaurant in Columbus, Ohio.

Little wonder that both teams can’t wait to get on the field Sunday in Jacksonville and try to create some good news in their AFC South matchup.

Tennessee (2-2) hasn’t exactly lived up to huge preseason expectations, aside from NFL rushing leader Derrick Henry. His 510 yards are 61 more than the Jaguars have as a team, and he has traditionally enjoyed huge games against the divisional rival.

And it’s no secret that the Titans need a lot from Henry. They listed 21 players — more than 40 percent of their active roster on game day — on their injury report Wednesday. Eight didn’t practice, including ballyhooed offseason acquisition Julio Jones (hamstring).

What’s more, their offensive line is having trouble keeping quarterback Ryan Tannehill upright. Tannehill absorbed seven sacks against the Jets and has been sacked a league-high 17 times in four games.

“I don’t think you can pin it on any one group or any one person,” Tannehill said. “I think everyone has played a part and as a group, we just have to clean it up. We’ve had opportunities and we’re this far away for a lot of reasons on different plays.”

Tennessee’s defense remains a concern, too. After spending more than $100 million for free agents such as Bud Dupree, Denico Autry and Janoris “Jackrabbit” Jenkins, the Titans are allowing 27.8 ppg — 26th in the NFL. Jenkins has allowed opponents to compile a 103.7 quarterback rating on balls thrown his way, which would be a career worst.

One senses Jacksonville (0-4) would love to have those problems.

The Jags appeared ready to post their first win on Sept. 30 in Cincinnati but blew 14-0 and 21-14 leads in a 24-21 defeat. Then Meyer’s actions blew up social media and gave a black eye to an organization that’s 12-40 since hacking up a fourth quarter lead in the 2017 AFC Championship Game at New England.

Meyer said Wednesday that he never considered resigning and that several members of the team’s leadership council have expressed their support.

“I had at least eight to 10 phone calls where they called me and they were over-the-top supportive,” he said. “A common thing was, ‘Coach, we all did stupid things.’ I’m really impressed with our guys.”

Rookie quarterback Trevor Lawrence, who has shown flashes of brilliance in the first four games but has also had trouble with interceptions, sounded like one of the players standing up for the embattled coach.

“I know most of the team feels this way: He’s still my head coach, I still respect him, regardless of what happens,” Lawrence said.

If they are to end their long losing streak, the Jaguars need to make some big plays defensively. They are last in the league with just five sacks and have managed just one interception while allowing 28.8 ppg.