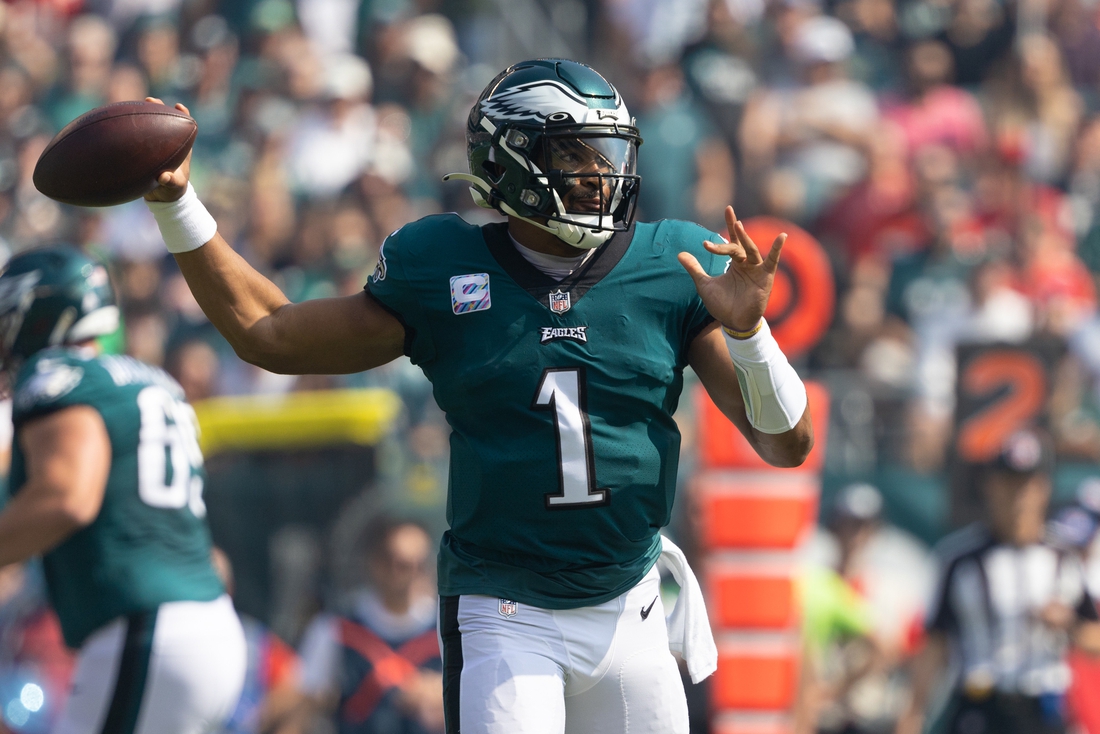 The Philadelphia Eagles keep finding solutions in some areas and problems in others.

That has added up to a three-game losing streak going into a matchup with the Carolina Panthers on Sunday afternoon in Charlotte, N.C.

The Panthers (3-1) are coming off their first loss, which brought to light their own areas of concern.

Carolina’s defense was shredded by the Dallas rushing attack last weekend, causing serious issues for the Panthers. The Panthers’ pass rush, which had been so fierce, was ineffective. So that unit is bound to be on a mission.

“We got to go out there and expect their best,” Eagles coach Nick Sirianni said of the Panthers. “We know they’re a talented defense.”

Philadelphia quarterback Jalen Hurts has made certain strides. That has provided a level of comfort for the Eagles (1-3), but they need to produce throughout games.

“I think anybody can go out there and make a splash play,” Sirianni said. “But can they do it week-in and week-out?”

That will be a question confronting the Eagles.

It’s a similar situation within the Carolina camp.

The Panthers have received strong production from quarterback Sam Darnold, who’s in his first season with the team.

“I have a lot of confidence when Sam has the ball in his hands,” Rhule said. “We have to keep finding ways to protect him. Through the first four games, Sam is certainly further ahead of where I think a guy in the first year in the system would be.”

The Panthers are focused on increasing the number of big plays, as they’ve missed chances to cash in on those.

“That would be the next step for me,” Rhule said.

That could be more difficult if running back Christian McCaffrey remains out of the lineup. He missed last Sunday’s 36-28 loss to the host Cowboys with a hamstring injury.

It was expected he would miss at least a couple of games, but he was back at practice in a limited capacity Wednesday. While that might have been an encouraging sign for the Panthers, linebacker Shaq Thompson (foot) didn’t participate.

Chuba Hubbard received a large chunk of the playing time in McCaffrey’s absence against Dallas. He rushed for 57 of the team’s 113 ground yards.

“We wanted to show that we could play ball, too,” Hubbard said. “We could run. We could catch. Make it seem like we almost didn’t skip a beat.”

The Panthers continue to retool amid injuries to the defensive backfield. They traded for veteran cornerback Stephon Gilmore from the New England Patriots in a deal announced Wednesday.

Philadelphia could have a shortage on the offensive line. Right tackle Lane Johnson remained away from the team Wednesday because of personal reasons and left tackle Jordan Mailata (knee) was limited in practice.

Philadelphia’s rushing defense has been shaky, ranking among the worst in the NFL against the run.

It could be an ideal time for the Eagles to unleash defensive tackle Fletcher Cox, who’s drawing extra attention from opposing offensive linemen. The Panthers have had trouble protecting Darnold at times, giving up five sacks to the Cowboys.

“We’ve got to make sure that we’re allowing him to eat as well,” Sirianni said of Cox.