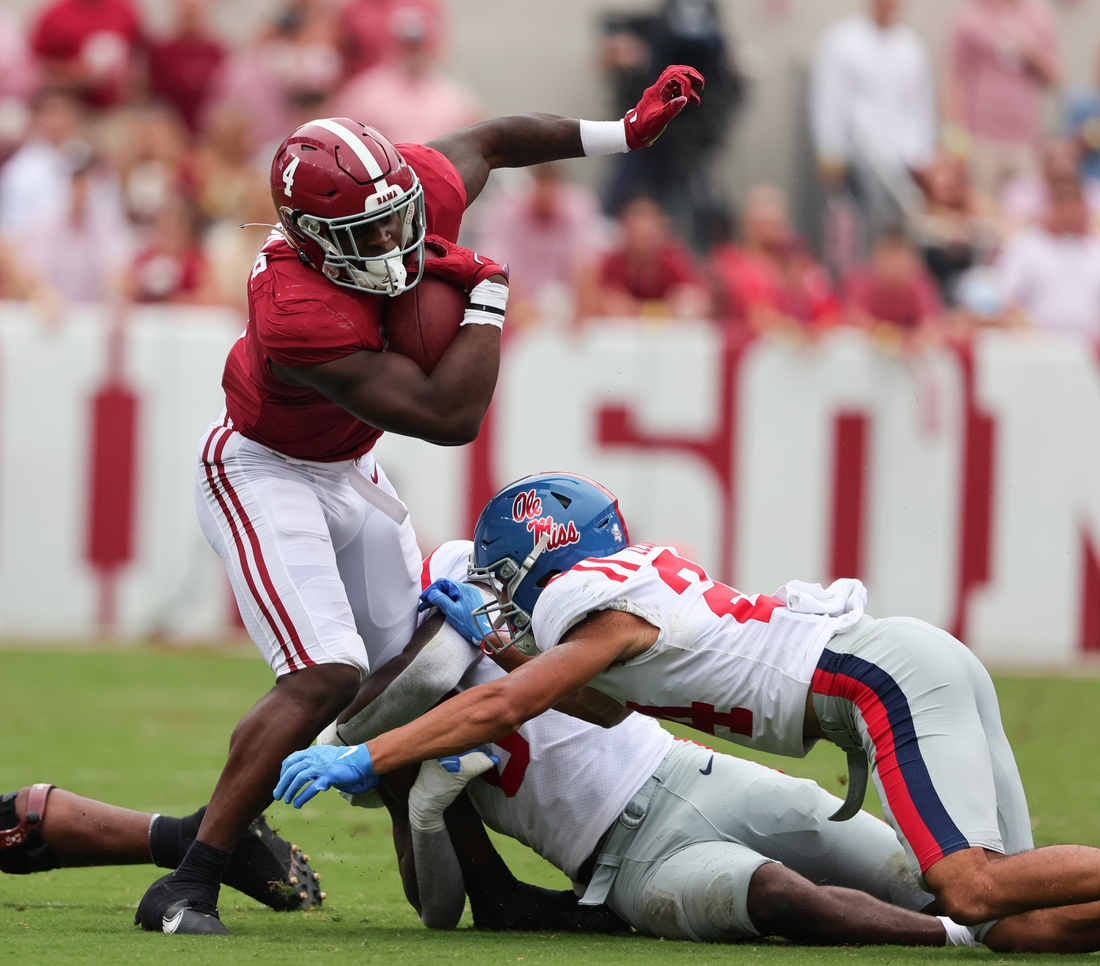 Brian Robinson Jr. set career highs with 171 yards rushing and four touchdowns, Bryce Young tossed two scoring passes and top-ranked Alabama stymied one of the nation’s top offenses Saturday in a 42-21 win over No. 12 Ole Miss in SEC play at Tuscaloosa, Ala.

Behind a stout defense, the Crimson Tide (5-0, 2-0 SEC) built a four-touchdown lead in the first half — capitalizing on three turnovers on downs and a fumble — to gain early control of the West Division matchup.

Young, a sophomore, went 21-of-27 passing for 241 yards with one interception. Robinson rushed 36 times for his first ever 100-yard game.

Ole Miss (3-1, 0-1) came into the game leading the nation in total offense (635.3 yards per game), but quarterback Matt Corral and his squad struggled as the offense produced 291 total yards.

Entering the Heisman Trophy discussion after his first three games, Corral was held to a 21-for-29 outing for 213 yards and a touchdown pass to Chase Rogers. The quarterback also rushed for a score.

The Rebels played fearlessly in the first half — attempting five fourth-down conversions — but failure on three of the risky decisions put them in a hole.

On the ensuing drive, Young stepped up into the pocket and finished a 14-play, 94-yard drive with a 16-yard strike to John Metchie III.

After another stop of the visitors on fourth down at the Ole Miss 47, Robinson burst through on Alabama’s first fourth-down attempt for a 1-yard score and a 14-0 lead with 12:14 left in the second quarter.

Following a third turnover on downs at the Ole Miss 31, Alabama went for it again near the goal line. Young then connected on a play-action pass to Cameron Latu for a 3-yard touchdown and a three-score advantage.

Robinson added another 1-yard score with 57 seconds left in the half after a fumble recovery by Justin Eboigbe.

In the second half after Robinson’s third tally, Corral rushed in from 10 yards to put the Rebels on the board. Robinson added a fourth-quarter score.