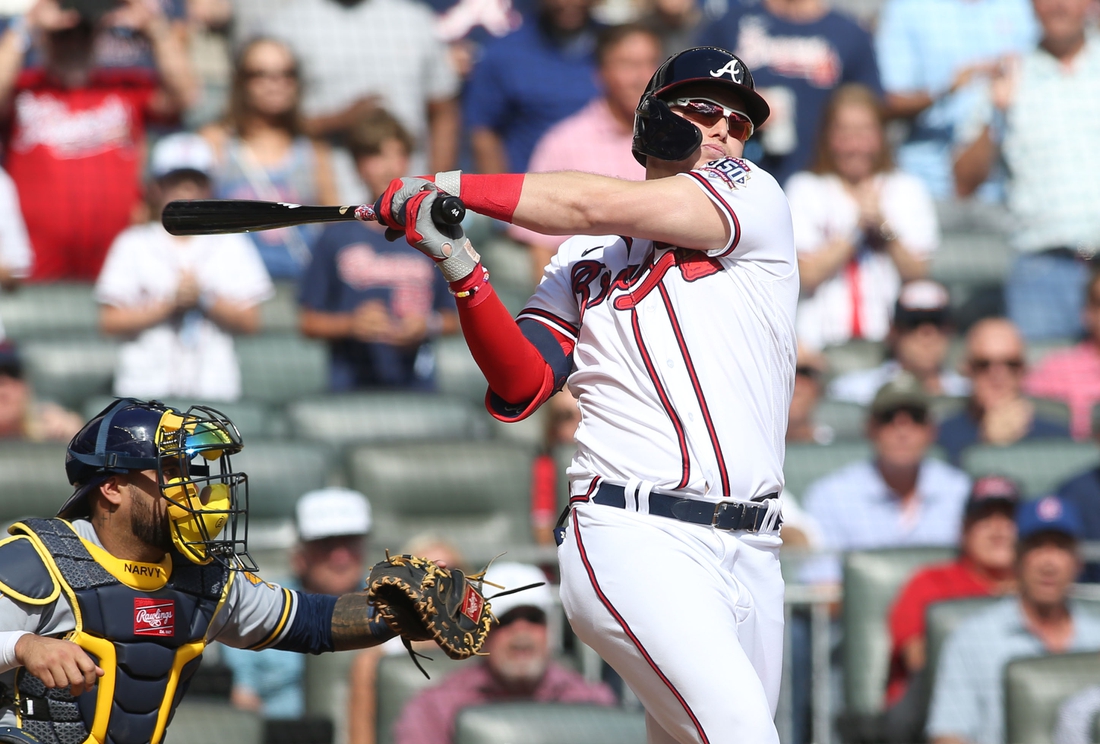 Joc Pederson belted a three-run homer in the fifth inning to lift the host Atlanta Braves to a 3-0 victory over the Milwaukee Brewers on Monday afternoon in Game 3 of their National League Division Series.

Pederson’s pinch-hit homer was his second of the series. He also launched a solo shot off Adrian Houser (1-1) in Atlanta’s 2-1 series-opening loss on Friday in Milwaukee.

“That’s what it’s like to have a lineup where anyone can clip you,” Pederson said afterward. “It puts a little more pressure on the pitchers. They make one mistake and 1-through-9 can hit [it out of] the yard anytime.”‘

Pederson hit his homer with a bat that belonged to former Chicago Cubs teammate Anthony Rizzo.

“I snagged one of his bats before I left (Chicago),” Pederson said, referencing being traded to the Braves in mid-July. “I used it a few times over there and I took it up (to the plate). Rizzo has that special October strength.”

Right-hander Ian Anderson (1-0) scattered three hits and struck out six over five innings for the Braves, who hold a 2-1 lead in the best-of-five series. Atlanta will look to punch its ticket to the NL Championship Series for the second straight season in Game 4 on Tuesday.

“I think we just need to keep it down. Just play the game,” Milwaukee catcher Omar Narvaez said of his team’s series deficit. “At the end of the day, it’s baseball. You never know what’s gonna happen. Just go 100 percent tomorrow and try to win the ballgame.”

The right-handed Houser relieved starter Freddy Peralta to begin the fifth inning and promptly surrendered singles to Travis d’Arnaud and Dansby Swanson. Pederson, who pinch-hit for Anderson, stepped up and deposited a 1-2 fastball from Houser over the wall in right field to stake the Braves to a 3-0 lead.

Three relievers bridged the gap to Will Smith, who retired the side in order in the ninth inning to secure his second save of the series.

“I think everything is just that much more important,” Anderson said. “Every pitch, every move, everything you can do. And I like that extra sense of focus, and I think I have been able to use that to my advantage.”

A base-running blunder prevented Atlanta from opening the scoring in the second inning.

Austin Riley and Adam Duvall singled to lead off the inning before the former advanced to third on Eddie Rosario’s flyout. Riley appeared poised to score on a flyout to left field by d’Arnaud, however Milwaukee outfielder Christian Yelich threw out Duvall at second base before Riley crossed the plate to negate the run.

The Brewers’ bid to open the scoring in the fifth fell short despite putting runners on second and third base with no outs. A groundout by Lorenzo Cain, a fielder’s choice by pinch-hitter Daniel Vogelbach with Luis Urias being caught in a rundown at home and a lineout by Kolten Wong ended the threat.

“We needed to score. It was a good opportunity to score,” Milwaukee manager Craig Counsell said of lifting Peralta for a pinch hitter after four shutout innings. “Vogelbach’s on the team for that situation.”

Swanson, a shortstop, started an inning-ending double play in the eighth to thwart another threat by Milwaukee.

In the second inning, long-time Braves player and Hall of Famer Chipper Jones failed to catch a foul ball in the stands. The eight-time All-Star and former NL MVP, ironically enough, does not have a Gold Glove on his impressive resume.