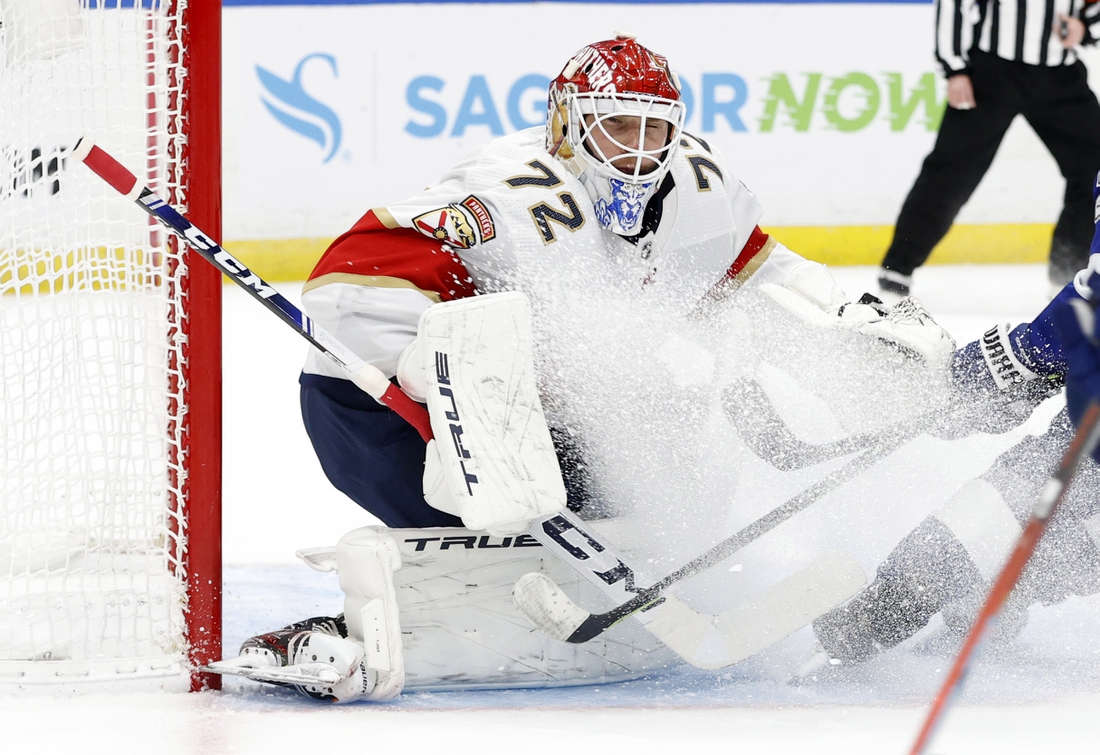 Sergei Bobrovsky is set to start in goal on Thursday night when his Florida Panthers open their season against the Pittsburgh Penguins, who are visiting after starting their season Tuesday with a 6-2 win over the Tampa Bay Lightning.

Bobrovsky is in the third season of his seven-year, $70 million contract. So far, he has not lived up to that deal, posting goals-against averages of 3.23 and 2.91 in his first two seasons — far below the standard he set at his previous stop with the Columbus Blue Jackets.

Now, Bobrovsky will try to hold off Spencer Knight, who was Florida’s first-round pick in 2019 and had a 2.32 GAA in four games last season as he made his long-awaited NHL debut.

“Every season brings new energy,” Bobrovsky said this week. “There are new opportunities for everyone, and we’re all excited.”

Barkov will share the first line with Sam Reinhart and Carter Verhaeghe. Reinhart, who has at least 17 goals and 40 points in each of his six full NHL seasons, was acquired in a July trade with the Buffalo Sabres.

Defensively, the Panthers dumped veterans Keith Yandle and Anton Stralman, but they brought back Aaron Ekblad off the injured list.

Ekblad will play on the top pairing with MacKenzie Weegar, who finished in the top 10 for the Norris Trophy last season after scoring a career-high 36 points.

Meanwhile, the Penguins will be without their two superstar forwards on Thursday. Sidney Crosby had wrist surgery on Sept. 8, and Evgeni Malkin had knee surgery on June 4.

In addition, the Penguins might again be without forwards Jake Guentzel and Zach Aston-Reese, both of whom recently came off the COVID protocol list. Also, defenseman Mike Matheson — a former Panthers standout — missed Tuesday’s game due to an undisclosed injury and is listed as day-to-day.

Even so, the Penguins still had more than enough talent to rout the two-time reigning Stanley Cup champion Lightning, thanks in part to Brian Boyle, who scored a goal in his comeback game.

Boyle, a 36-year-old leukemia survivor, scored a goal in his first NHL game in 14 months. His last outing before Tuesday was on Aug. 7, 2020, for the Panthers.

“That was awesome to see,” Penguins forward Danton Heinen said of Boyle’s goal on Tuesday. “He’s a great teammate, always smiling. It was a great goal, too.”

Pittsburgh’s top goalie is Tristan Jarry, who beat the Lightning on Tuesday by making 26 saves on 28 shots.

The Penguins, who have made the playoffs 15 straight years, are looking for a big season from Jarry, who wasn’t sharp in the 2021 postseason (.888 save percentage).

Pittsburgh has been eliminated in the first round of the playoffs in each of the past three seasons.

“We’re a way better team when (Crosby and Malkin) are playing,” Penguins defenseman Kris Letang said. “But we also have a great team when they’re not in the lineup.”