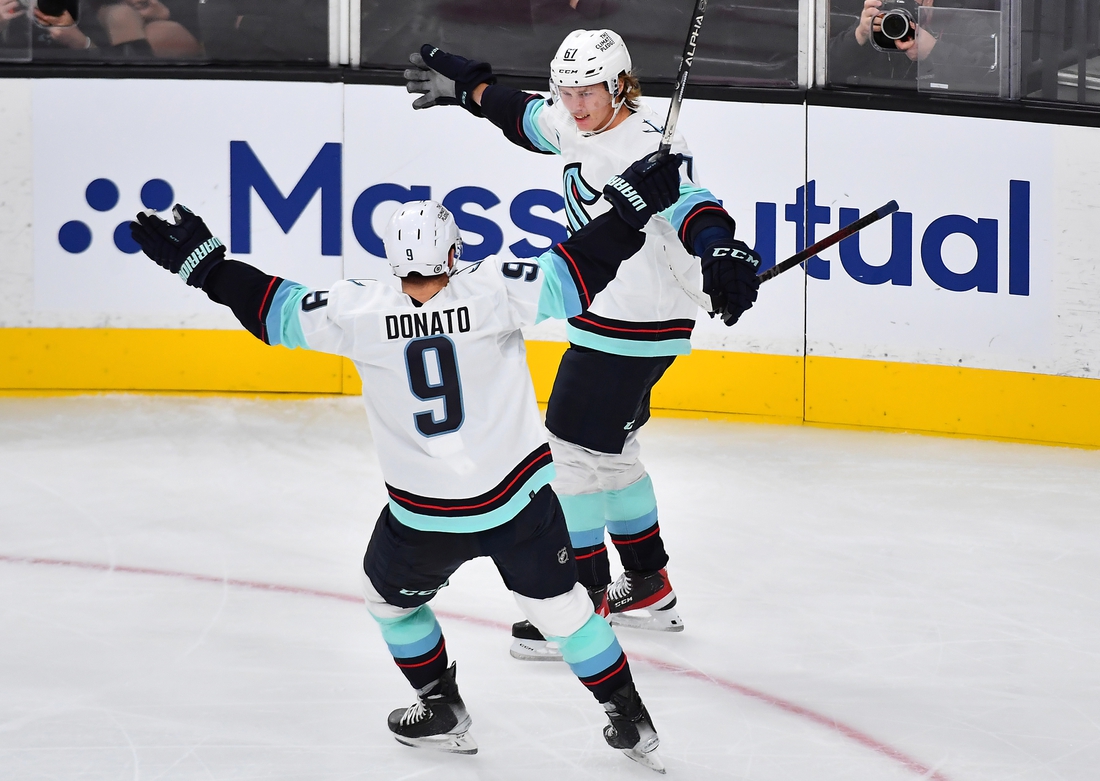 From Sin City to the Music City.

After rallying from a three-goal deficit, only to suffer a 4-3 defeat, at Vegas in their inaugural NHL game Tuesday, the Seattle Kraken will continue their season-opening, five-game trip with a stop in Nashville to play the Predators on Thursday night.

“We will take a lot of the good things we did and build off of those,” Kraken coach Dave Hakstol said. “We’ll try to fix one or two things and not try to do more than that. We got a short practice (Wednesday) and then get on a plane and fly to Nashville and get ready for Game 2.”

Perhaps blinded by the bright lights of Vegas, the Kraken fell behind 3-0 early in the second period on Max Pacioretty’s second goal of the night.

“Obviously, you come into Vegas and it’s a spectacular city and they put on quite a show,” Seattle center Morgan Geekie said.

Geekie tied the score at 3-3 at 7:58 of the third period with a wrist shot from the right faceoff circle that beat Vegas goaltender Robin Lehner high to the near side.

But the Golden Knights’ Chandler Stephenson restored the hosts’ advantage just 35 seconds later, the puck going off the outside of his skate and into the net from just outside the crease.

A video review determined Stephenson didn’t make a distinct kicking motion and the goal stood, much to Hakstol’s disappointment.

“I thought it was a kicking motion, but there’s gray area in terms of those calls,” Hakstol said.

Still, the expansion team showed some pluck, especially since it didn’t know if it would have forwards Joonas Donskoi and McCann and defenseman Jamie Oleksiak until late in the afternoon. The trio cleared COVID-19 protocols and took a private jet to Las Vegas to arrive before game time.

“I think it kind of speaks to our character as a team,” Geekie said. “You know, we knew they were a good team coming in here, and they kind of paved the way. But I liked what we brought (Tuesday), and I think we got better as the game went on.”

Thursday’s game will be the regular-season opener for the Predators, who went 31-23-2 last season before being eliminated in the first round of the playoffs by Carolina.

“Yeah, this team looks a lot different than the team that went to the finals in ‘17, but it’s not necessarily uncommon or a bad thing because it happens so often,” Nashville center Matt Duchene said. “And those changes are necessary sometimes.”

Added fellow forward Filip Forsberg: “Obviously there’s been some changes this offseason. But the guys that we brought in … I believe a lot in.”

The Predators completed a successful preseason by going 4-1-1.

“We got four (wins) in a row here,” said forward Tanner Jeannot, “but now the real work starts.”