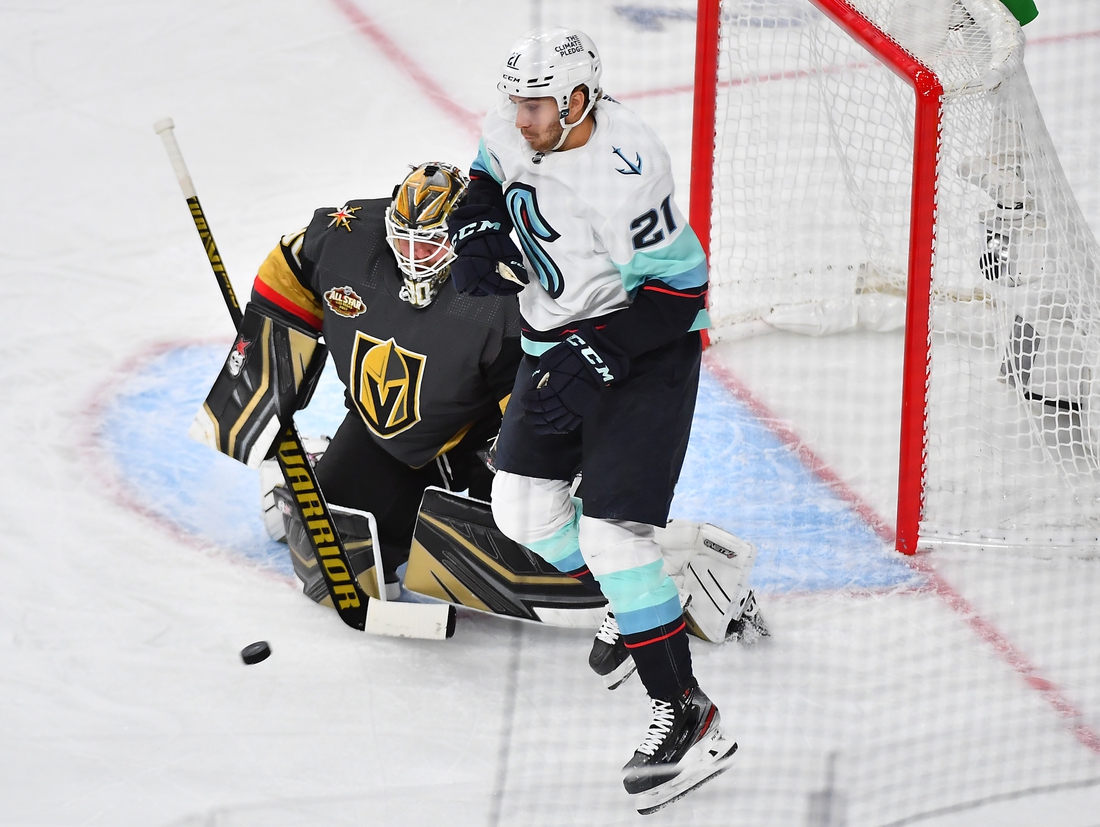 Max Pacioretty had two goals and an assist and Chandler Stephenson scored the game-winner as the Vegas Golden Knights spoiled the debut of the expansion Seattle Kraken with a 4-3 victory on Tuesday night in Las Vegas.

Jonathan Marchessault also scored and Mark Stone added three assists for the Golden Knights. Robin Lehner — taking over for reigning Vezina Trophy winner Marc-Andre Fleury, who was traded to the Chicago Blackhawks in the summer — finished with 28 saves.

Ryan Donato scored the first goal in Kraken history in the second period. Jared McCann, cleared earlier in the day from COVID-19 protocol, and Morgan Geekie also scored for Seattle, which rallied from a 3-0, second-period deficit to tie it.

Philipp Grubauer made 26 saves for the Kraken, who continues their season-opening five-game road trip on Thursday night at Nashville.

It was almost a storybook start for Seattle as Jordan Eberle’s wrist shot from the bottom of the right circle caromed off the crossbar just 25 seconds into the game.

Pacioretty gave Vegas a 1-0 lead less than three minutes later when he took a cross-ice pass from Stone on an odd-man rush and fired a wrist shot from the left faceoff dot that beat Grubauer on his glove side.

Marchessault made it 2-0 at the 6:36 mark when he broke in down the slot, deked Grubauer and then wrapped in a backhand shot inside the near post.

Vegas, which fired 11 of the first 12 shots in the second period, extended its lead to 3-0 on Pacioretty’s second goal of the game. He deflected a shot by Nicolas Hague from the high slot.

Seattle got back into the game midway through the period with two goals in 72 seconds. Donato went into the history books with the first goal in team history, backhanding in a rebound of Vince Dunn’s shot that landed in the middle of the crease.

McCann then made it 3-2 when he took a pass from Eberle and drove down the right wing, where his backhanded shot deflected into the net off the stick of Vegas defenseman Shea Theodore.

Midway through the third period, Geekie’s wrist shot from the middle of the right circle sailed over the glove of Lehner to tie it, 3-3.

However, the Golden Knights regained the lead for good just 35 seconds later, at 8:33 pf the final period. Stone’s cross-ice pass from the right wing ricocheted into the net off Stephenson’s right skate.