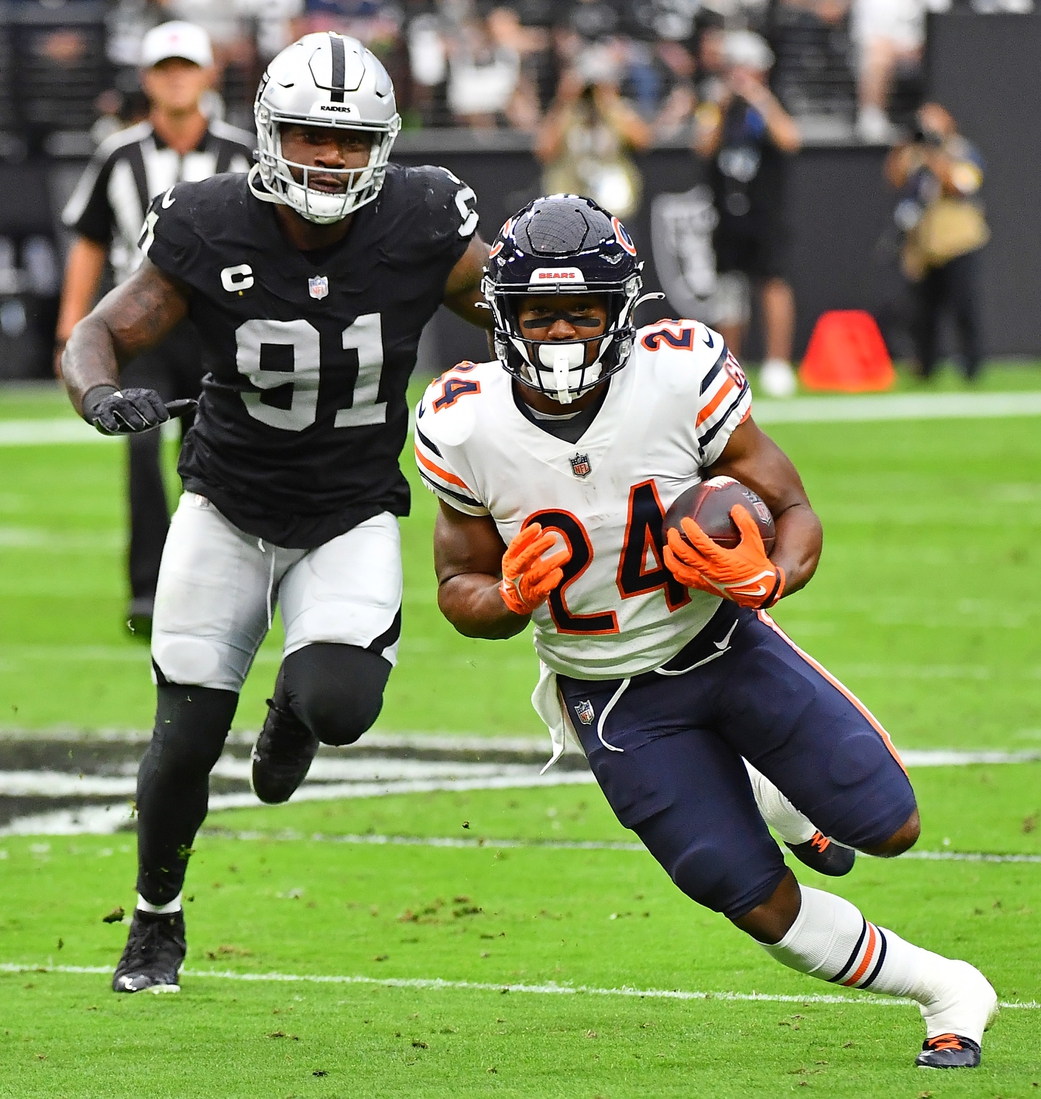 Justin Fields passed for 111 yards and a touchdown to lead the visiting Chicago Bears to a 20-9 victory over the Las Vegas Raiders on Sunday afternoon.

Fields completed 12-of-20 passes in his first start since being named the permanent starter for the Bears (3-2), who got plenty of help from a ground game that rolled up 143 yards. Khalil Herbert, a rookie from Virginia Tech, led the way with 75 yards on 18 carries, while Damien Williams rushed for 64 yards and a touchdown.

Roquan Smith had 10 tackles and Khalil Mack had eight tackles and a sack to lead Chicago’s defense, which held Las Vegas, which was averaging 406.5 yards in total offense, to just 259 yards.

Derek Carr completed 22-of-35 passes for 206 yards and an interception for Las Vegas (3-2), while Josh Jacobs rushed for 48 yards and a touchdown on 15 carries.

The Raiders overcame a pair of holding penalties, including one that wiped out a 2-yard touchdown run by Jacobs, to take a 3-0 lead on a 31-yard field goal by Daniel Carlson with four minutes to go in the first quarter, capping a 13-play, 69-yard drive.

But the Bears answered with a 10-play, 72-yard drive to take a 7-3 lead with Fields connecting with Jesper Horsted at the back of the end zone for a 2-yard touchdown, Fields’ first NFL scoring pass.

The drive was kept alive by roughing the passer penalties on both Yannick Ngakoue and Maxx Crosby as well as an illegal hands to the face penalty by Johnathan Abram.

Chicago then made it made 14-3 on its next possession, driving 86 yards in 16 plays while chewing 8:17 off the clock and losing Fields for three plays with a left leg injury after a tackle by Ngakoue.

Fields returned to hit Allen Robinson II with a 12-yard pass to the Las Vegas 20. Herbert followed with a pair of runs to the 4, where Williams, using a nifty spin move on corner Amik Robertson in the flat, scored off left tackle.

The Raiders cut it to 14-9 with 9:05 to go in the game on a 1-yard run by Jacobs. The 16-play, 74-yard drive saw Carr leave for four plays after taking a shot to the head from Smith on a quarterback sneak on third-and-one at the Bears 43.

Nathan Peterman came in and drove the Raiders to another first down, capped ironically by a 1-yard keeper on fourth-and-one at the 32. Las Vegas attempted a two-point conversion, but Mack sacked Carr.

Chicago then answered with another time-consuming 10-play, 57-yard drive that used up 6:16. It was capped by a 46-yard field goal by Cairo Santos with 2:45 remaining.

After the Bears stopped the Raiders on downs, Santos sealed the win with another 46-yard field goal, his 34th successful field goal try in a row.