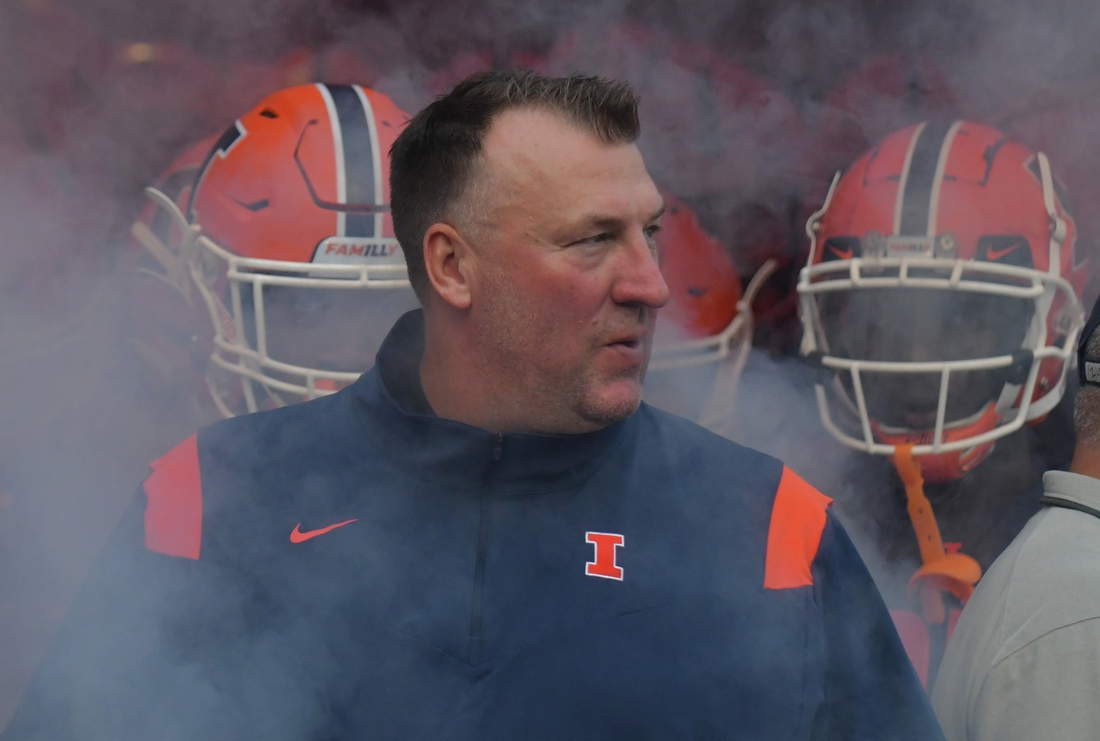 While each team’s search for offensive consistency will be the focus once Wisconsin kicks off at Illinois in a Big Ten clash Saturday, much of the pregame attention will land on first-year Illini coach Bret Bielema facing his former team for the first time.

Bielema coached Wisconsin for seven seasons, where he was 68-24 three two Rose Bowl appearances before surprisingly leaving for Arkansas following the last regular-season game in 2012. Bielema was 29-34 with the Razorbacks before being fired after five seasons.

“I’ve got a lot of respect for everything that Paul’s done. Obviously, he and I have known each for a long time,” Bielema said. “But this game is about the University of Illinois football vs. the University of Wisconsin football.

“Every game is a big game when you’re in the infancy of a program when we’re trying to build a foundation of how we’re going to play,” Bielema said. “I’m excited because it’s a Big Te=n game, a Big Ten West opponent that is a really good football team, that’s been able to sustain success for a long time.”

Illinois (2-4, 1-2 Big Ten) opened the season with a 30-22 victory over Nebraska, but then lost four in a row before scoring a 24-14 nonconference win over Charlotte behind two second-half touchdowns from Chase Brown, who ran for 257 yards.

The Badgers are 1-3 for the first time since former coach Barry Alvarez’s first season in 1990, when the Badgers finished 1-10. Wisconsin, ranked 12th in the preseason poll, also has lost to ranked teams Penn State and Notre Dame, with its only victory over Eastern Michigan.

“We get to choose the direction that we go and I’m confident in the group that we have,” Chryst said. “We’re going to make this a great week of preparation so we can go out and play our best.”

Wisconsin remains something of an unknown, insofar as their three defeats all came against ranked teams, when the Badgers were outscored in the fourth quarter 58-13. That means in the first three quarters of those games, Wisconsin has played evenly (27-27).

The Badgers are scoring just 18.5 points per game, last in the Big Ten. Illinois is one spot above at 20.7.

Wisconsin quarterback Graham Mertz is questionable after suffering a chest injury on a vicious sack in the first series of the second half against Michigan. Reserve Chase Wolf lost a fumble and thew an interception, completing 3 of 8 passes for 52 yards — with 25 of those on a consolation touchdown in the closing minute.

Long-known for an overpowering ground game with a massive offensive line opening running room for the likes of Jonathan Taylor and Melvin Gordon — even going back to 1999 Heisman Trophy winner Ron Dayne — Wisconsin currently ranks tied for 64th nationally in rushing offense (163 yards a game).

The Badgers managed just 43 yards rushing against Michigan at a paltry 1.3 yards per carry. For the season, they have rushed for just five touchdowns and four of them came against Eastern Michigan.

Wisconsin’s defense has kept the Badgers close against their ranked opponents. They lead the nation in rushing defense, yielding just 45.2 yards per game and 1.6 yards per attempt. The Badgers have allowed just one rushing play of more than 10 yards.

Wisconsin is third nationally in total defense at 249 yards per game. Illinois is ranked 98th, giving up 417.3 yards per contest.

Wisconsin has won 10 of the last 11 meetings with Illinois, including a 45-7 victory last season at Madison in which Mertz threw five touchdown passes in his first collegiate start.

On Wisconsin’s last trip to Illinois, in 2019, the Illini shocked the sixth-ranked Badgers, 24-23, on James McCourt’s 39-yard field goal as time expired. Illinois overcame a 23-14 deficit in the last six minutes, using a late interception by Tony Adams Jr. to set up the winning score.

Adams has eight field goals this season, including a 53-yarder, and Adams has one interception for the Illini, giving him six for his career.