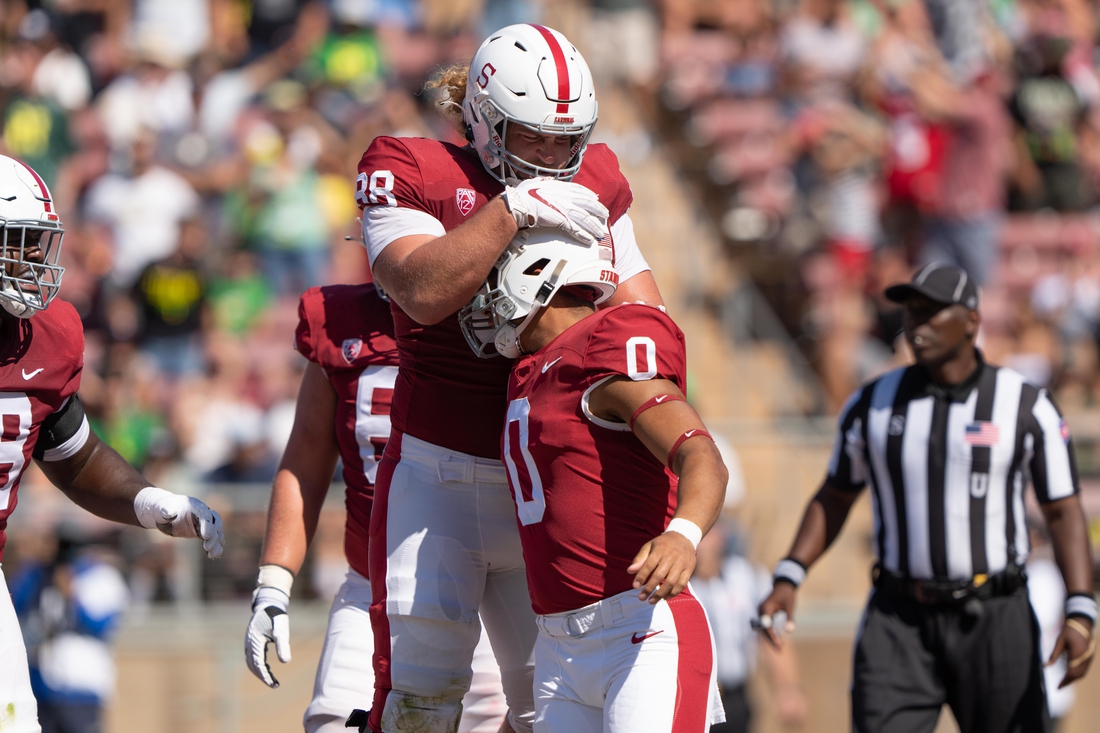 The Oregon-Stanford rivalry has seen some close games in its recent history, and Saturday afternoon in Palo Alto, Calif., will go down as an all-time stunner.

Stanford scored a touchdown on an untimed down on the last play of regulation, then scored on a 14-yard touchdown pass from Tanner McKee to John Humphreys in overtime and held on for a 31-24 upset of the third-ranked Ducks.

Oregon had the ball last and was forced to go for it on fourth-and-8, but Anthony Brown’s pass fell incomplete to end the game. The Ducks (4-1, 1-1 Pac-12) overcame a 10-point halftime deficit to take a 24-17 lead in the fourth quarter, scoring on three consecutive drives in the second half.

Stanford (3-2, 2-1) stopped Oregon on downs near the goal line just before halftime to take a 17-7 lead into the break, and seemingly had all the momentum. But they needed a major comeback to win.

Brian Robinson Jr. set career highs with 171 yards rushing and four touchdowns, Bryce Young tossed two scoring passes and the Crimson Tide stymied one of the nation’s top offenses in a win over the Rebels in SEC play at Tuscaloosa, Ala.

Behind a stout defense, the Crimson Tide built a four-touchdown lead in the first half — capitalizing on three turnovers on downs and a fumble — to gain early control of the West Division matchup. Young, a sophomore, went 21-of-27 passing for 241 yards with one interception. Robinson rushed 36 times for his first ever 100-yard game. Alabama moved to 56-10-2 all-time in the series.

Ole Miss came into the game leading the nation in total offense (635.3 yards per game), but quarterback Matt Corral and his squad struggled as the offense produced 291 total yards.

Running back Zamir White rushed for two touchdowns and recovered a blocked punt in the end zone to lead the Bulldogs to a convincing victory over the Razorbacks at Athens, Ga.

Behind quarterback Stetson Bennett, filling in for injured starter JT Daniels who was out with a strained lat muscle, the Bulldogs stuck to their punishing ground game against the Razorbacks to remain undefeated.

White finished with 68 yards on 16 carries, James Cook rushed for 87 yards on 12 carries and Kenny McIntosh Milton added 57 yards on 10 attempts. The Bulldogs finished with 273 rushing yards on 57 attempts, as Bennett seldom threw the ball, finishing 7-for-11 passing for 72 yards.

Clifford finished 17 of 33 for 178 yards and was intercepted once, while Jahan Dotson continued his strong season with eight catches for 84 yards and two TDs.

The Nittany Lions posted their first shutout since 2019 and next will visit No. 5 Iowa in a much-anticipated showdown next weekend. Indiana, meanwhile, was blanked for the first time since 2000. Michael Penix Jr. went 10 of 22 for 118 yards with an interception for the Hoosiers, who were outgained 408-264.

Spencer Rattler completed 22 of 25 passes as the Sooners defeated the host Wildcats.

Oklahoma snapped a two-game losing streak to the Wildcats.

The Wildcats outgained the Sooners 420-392, including 320-261 through the air, but it wasn’t enough. Rattler finished with 243 yards passing and two touchdowns, with one interception.

Desmond Ridder threw for two touchdowns and ran for the game-clinching score as the Bearcats passed perhaps their biggest regular-season test, stopping the Fighting Irish in South Bend, Ind.

In improving to 4-0, the Bearcats set themselves up for a legitimate chance at an undefeated season that might make them the first Group of Five school to crash the College Football Playoff.

Ridder completed 19 of 32 passes for 297 yards and made just one mistake, losing a fumble in the third quarter that the Fighting Irish converted into their first touchdown.

The Wildcats broke a 16-game home losing streak to the Gators when Jacquez Jones deflected a potential touchdown pass with nine seconds left to polish off an upset in Lexington.

The Gators drove to the Wildcats’ 8-yard line and had fourth-and-goal. Gators quarterback Emory Jones appeared to have an open receiver in the end zone, but Jacquez Jones leaped and got a fingertip on the ball as the sellout crowd erupted.

Fans stormed the field as Kentucky ran out the clock on its first home win over Florida since 1986. The result could propel the Wildcats into the Top 25 when the new poll is announced on Sunday.

C.J. Stroud returned to pass for 330 yards and a career-high five touchdowns as the Buckeyes routed the host Scarlet Knights.

Stroud did not play in the 59-7 win for the Buckeyes over Akron on Sept. 25 to rest his sore shoulder but was sharp against the Scarlet Knights, with four first-half TDs en route to a 45-6 lead.

Rutgers entered off a 20-13 loss at ranked Michigan in its previous game but visions of upsetting the Buckeyes faded quickly as TreVeyon Henderson and Denzel Burke scored 40 seconds apart for an early 14-0 advantage.

Cade McNamara passed for two touchdowns and the Wolverines capitalized on turnovers for a victory over the host Badgers in Michigan’s first victory at Madison since 2001.

The undefeated Wolverines, playing on the road for the first time, pulled away from a 13-10 halftime lead. Michigan turned two fumble recoveries and an interception into 14 points.

Wisconsin, which also lost to No. 4 Penn State and No. 9 Notre Dame, opened 1-3 for the first time since former coach Barry Alvarez’s first season in 1990, when the Badgers finished 1-10.

Will Rogers threw for three touchdowns and the visiting Bulldogs withstood a rally from the Aggies to hold on for an upset victory in College Station, Texas.

Rogers was 46-for-59 for 408 yards, helping the offense overcome a rushing attack that managed just 30 yards. Makai Polk made 13 catches for 126 yards, though nine Mississippi State players had three or more receptions.

Zach Calzada threw for 135 yards on 12-for-20 passing for Texas A&M. Isaiah Spiller gained 100 rushing yards on 16 carries for the Aggies, who face top-ranked Alabama next week.

McCall had a perfect throwing performance, completing all 13 of his passes and ending up with 212 yards in the air. The Chanticleers, who were playing in their Sun Belt Conference opener, did most of their damage early in building a 38-3 halftime lead in front of a Brooks Stadium-record crowd of 18,674. Coastal Carolina also received 95 rushing yards from Reese White, who carried the ball 15 times.

UL-Monroe picked up its points on field goals of 40 and 30 yards from Calum Sutherland. The Warhawks, who had won their previous two games for their first back-to-back wins since 2018, were unable to replicate that recent success.

Kenneth Walker III scored three rushing touchdowns in the first half, Jayden Reed returned a punt for a touchdown for the second straight game, and the Spartans defeated the Hilltoppers in East Lansing, Mich.

Bailey Zappe completed 46 of 64 passes for 488 yards and three touchdowns for the Hilltoppers. Jerreth Sterns caught 17 passes for 186 yards and a touchdown.

Jaylen Warren rushed 125 yards and two touchdowns on 36 carries and Spencer Sanders amassed 258 yards of total offense as the Cowboys remained undefeated with a win over the Bears in Big 12 play in Stillwater, Okla.

Warren’s 4-yard scoring run on fourth-down with 2:10 to play clinched the victory for the Cowboys. Oklahoma State has won its first five games of the year for the first time since 2015.

Jayden Daniels passed for 286 yards, connecting on two long touchdown passes to Ricky Pearsall, as the Sun Devils took over sole possession of first place in the Pac-12 South by beating the Bruins in Pasadena, Calif.

Daniels completed 13 of 18 passes and also ran for 45 yards on six carries. Pearsall had scoring grabs of 65 and 54 yards in the second quarter. Rachaad White and DeaMonte Trayanum combined to rush for 131 yards and three touchdowns for the Sun Devils.

UCLA quarterback Dorian Thompson-Robinson was 21 of 32 passing for 235 yards and a touchdown, and he also led the Bruins in rushing with 93 yards on 18 attempts. UCLA tight end Greg Dulcich caught nine passes for 136 yards.

Bo Nix bounced back from a benching a week earlier to pass for one touchdown and run for another and rally Auburn to a victory against host LSU.

Nix, who watched from the sideline as TJ Finley replaced him and rallied Auburn to a victory against Georgia State last week, completed 23 of 44 passes for 255 yards and rushed 12 times for 74 yards. Jarquez Hunter broke a 44-yard run to set up his own 1-yard touchdown that gave Auburn its only lead of the game with 3:11 remaining.

Max Johnson passed for 325 yards and a touchdown with one interception but LSU rushed for just 29 yards.

Devin Leary threw two touchdown passes and the Wolfpack built on their big upset from a week earlier by defeating the Bulldogs in Raleigh, N.C.

Zonovan Knight’s 4-yard touchdown run with 7:45 left helped clinch the outcome for NC State, which moved to a 4-1 record for the second year in a row. Leary ended up 22-for-36 for 251 yards. NC State’s Ricky Person, who had a 24-yard touchdown run in the third quarter, produced 90 yards on the ground on 15 attempts.

Austin Kendall finished with 341 passing yards and three touchdowns for Louisiana Tech (2-3), which has just four victories in 52 all-time games against Top 25 opposition.

Nick Sciba kicked a 29-yard field goal with 22 seconds left to give the Demon Deacons a victory over the Cardinals in Winston Salem, N.C.

Sam Hartman threw a 7-yard touchdown pass to A.T. Perry with 3:52 remaining to give the undefeated Demon Deacons a 34-27 advantage. Hartman finished 23 of 39 for 324 yards with two touchdowns and one interception.

Kobe Pace rushed for 125 yards and a touchdown as the Tigers survived an upset bid from the Eagles for a victory at Clemson’s Memorial Stadium.

Clemson needed a fumble recovery by defensive end K.J. Henry at its own 23-yard line with 49 seconds left to preserve the victory. It was Clemson’s school-record 31st consecutive home victory, extending the longest active home winning streak in the nation. Pace, who got Clemson on the scoreboard first with a 59-yard burst with 8:02 left in the first quarter, became the Tigers’ first 100-yard rusher this season, posting 125 rushing yards on 19 carries. Pace also had two receptions for 41 yards.

Boston College quarterback Dennis Grosel completed 23 of 40 attempts for 311 yards, but was intercepted twice. Clemson’s defense held the Eagles to 46 yards rushing — 174 below their average — and collected nine tackles for loss, including four sacks.