NCAAF: Embattled LSU gunning for another upset of No. 20 Gators 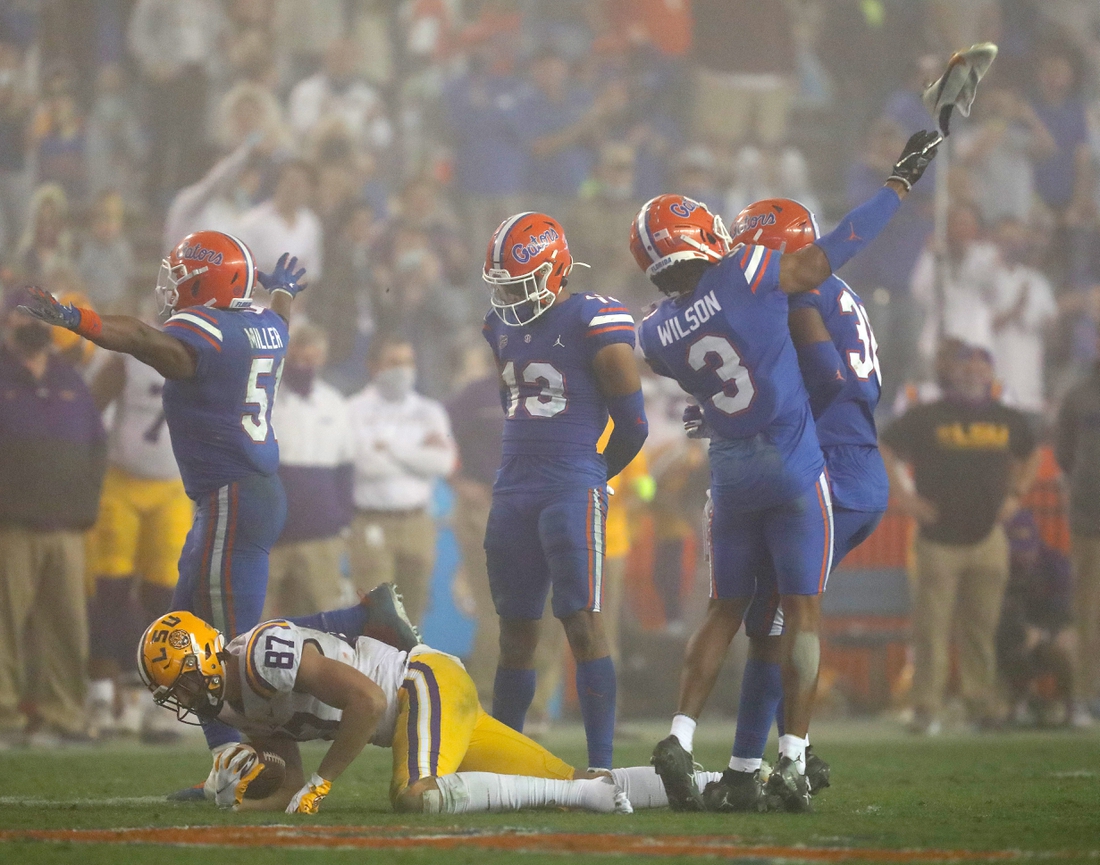 The highlight of LSU’s disappointing 2020 season was a 37-34 road victory against No. 6 Florida.

The Tigers (3-3, 1-2 SEC) are having another disappointing season but could salvage some respectability by again beating the visiting No. 20 Gators (4-2, 2-2) on Saturday.

Most of the attention being paid to the LSU program is focused on the future of embattled head coach Ed Orgeron and a growing list of injured players.

Orgeron is just two years removed from a CFP championship, but consecutive SEC defeats, including a lackluster 42-21 loss at then-No.16 Kentucky last week, has led to speculation that the Tigers (5-5 a year ago) might be in the market for a new coach.

“Nobody has told me about my job status,” said Orgeron, who has four years left on his contract after this season. “I haven’t had any discussion about it. As far as I know I’m the head coach of the LSU Tigers. That’s all that matters.”

All but one of the Tigers’ remaining games are against Top 25 teams, and the injuries are mounting.

Cornerback Derek Stingley, a possible top 10 NFL Draft pick, has played little this season and might not return after undergoing an unspecified procedure on his injured foot.

Wide receiver Kayshon Boutte, who was tied for the NCAA lead with nine touchdown receptions, suffered a season-ending ankle injury against Kentucky. Projected starting quarterback Myles Brennan’s return is uncertain after he suffered a broken arm shortly before the start of preseason camp and top pass rusher Ali Gaye will miss at least the game against Florida.

“Nobody has to tell me about the LSU expectations,” said Orgeron, a Louisiana native. “I know them, I was born with them. I know this isn’t the LSU standard of performance.”

The Gators went into Lexington a week before the Tigers and were upset 20-13 by the undefeated Wildcats in front of a raucous crowd.

Florida committed 15 penalties, including eight false starts. The Gators didn’t have any false starts at home last week against Vanderbilt, but still committed eight penalties for 80 yards in a 42-0 victory over the Commodores.

“It’s mainly just the focus and the discipline in making sure we’re just locked in every single play, because we have to be,” said Emory Jones, who threw a career-high four touchdowns against Vanderbilt.

“The biggest improvement he’s made is his comfort with decision making on game day when distributing the ball,” Mullen said.

The Gators, who had already won the East Division, lost their composure at the end of loss to LSU last season.

The score was tied late in the fourth quarter when the Tigers came up well short of a first down on third-and-10 at their own 29, but the possession was extended when Florida’s Marco Wilson threw tight end Kole Taylor’s shoe, drawing an unsportsmanlike conduct penalty.

“Honestly, we were thinking we had everything in the bag, and that came back to bite us,” Jones said. “Everyone on the team now knows that and knows the mistake that we made then and that definitely won’t happen anymore.”