NCAAF: Casey Thompson leads No. 21 Texas against No. 6 Oklahoma 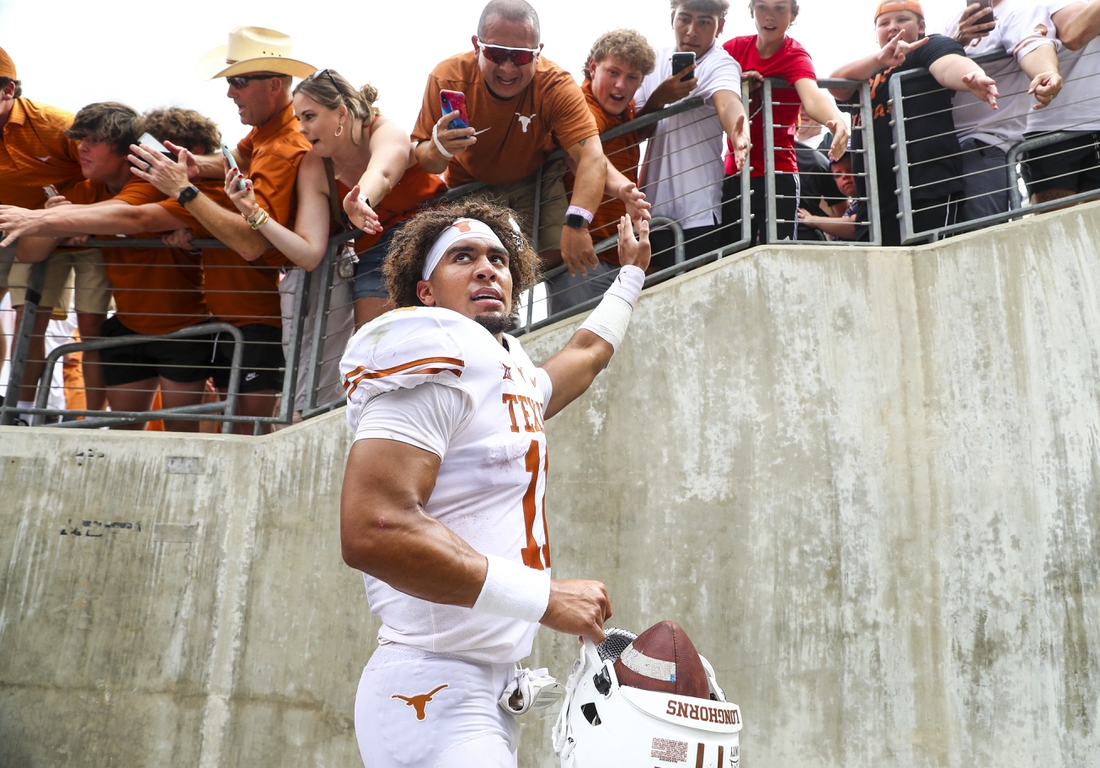 But Saturday, Casey Thompson will be on the other side of one of college football’s top rivalries, starting at quarterback for the No. 21 Longhorns when they take on the No. 6 Sooners in Dallas’ Cotton Bowl.

“Obviously, everyone knows my story. I’m from Oklahoma and I play for Texas, and so that alone is unique,” Thompson said. “But I’m just trying to focus on the matchup, focus on the game play, and focus on just keeping this offense and this team focused, and being able to just quiet out the noise.”

Thompson was heavily recruited by the Sooners in the 2018 class, especially late in the process after Cameron Rising flipped from Oklahoma to Texas. But Thompson chose to stick with the Longhorns, both in signing even after Rising’s flip and then sitting behind Sam Ehlinger for his first three seasons until he took over for Ehlinger in the Longhorns’ 2020 Alamo Bowl win over Colorado.

Thompson’s candidacy to take over permanently for Ehlinger got a boost in the bowl when he threw for four touchdowns in the second half. Following preseason camp, Hudson Card earned the starting nod from new coach Steve Sarkisian, who then turned to Thompson to take over the starting role in Game 3.

The Longhorns (4-1, 2-0 Big 12) have been much better offensively since Thompson took over, averaging 558 yards of total offense in the three games the junior has started, more than 200 more than they averaged in the first two games with Card starting.

While Thompson has played a big role in the Longhorns’ offense surge, running back Bijan Robinson has been perhaps the biggest reason for Texas’ improvement. Robinson has rushed for 480 yards over the last three games.

Oklahoma (5-0, 2-0) has flirted with danger in all four of its games against Football Bowl Subdivision opponents, winning each by a touchdown or less.

One of the Sooners’ issues has been getting their defense off the field. Opponents have converted just 34.7% of their third downs, but have attempted 19 fourth-down conversions — tied for most in FBS — and have converted 12 of them.

“We’ve had a number of time we’ve gotten opponents down to third down early in the series, and you’ve got to capitalize on those especially early in the game,” Sooners coach Lincoln Riley said. “It’s so important as far as setting a tone that way. We’ve done so many good things defensively this year, but we haven’t played our best early.”

Oklahoma has won the last three meetings between the teams (including the 2018 Big 12 Championship Game), and has won four of the last five in the annual October clash at the State Fair of Texas.

It will be the first taste of the rivalry for Sarkisian, who replaced Tom Herman in January.

“I love the pomp and pageantry of college football, I love the history, I love the nostalgia,” Sarkisian said. “To think this is the 117th time these two schools are meeting — that’s a crazy number, you know? So from that aspect of it, the State Fair, all that stuff, I’m looking forward to it.”