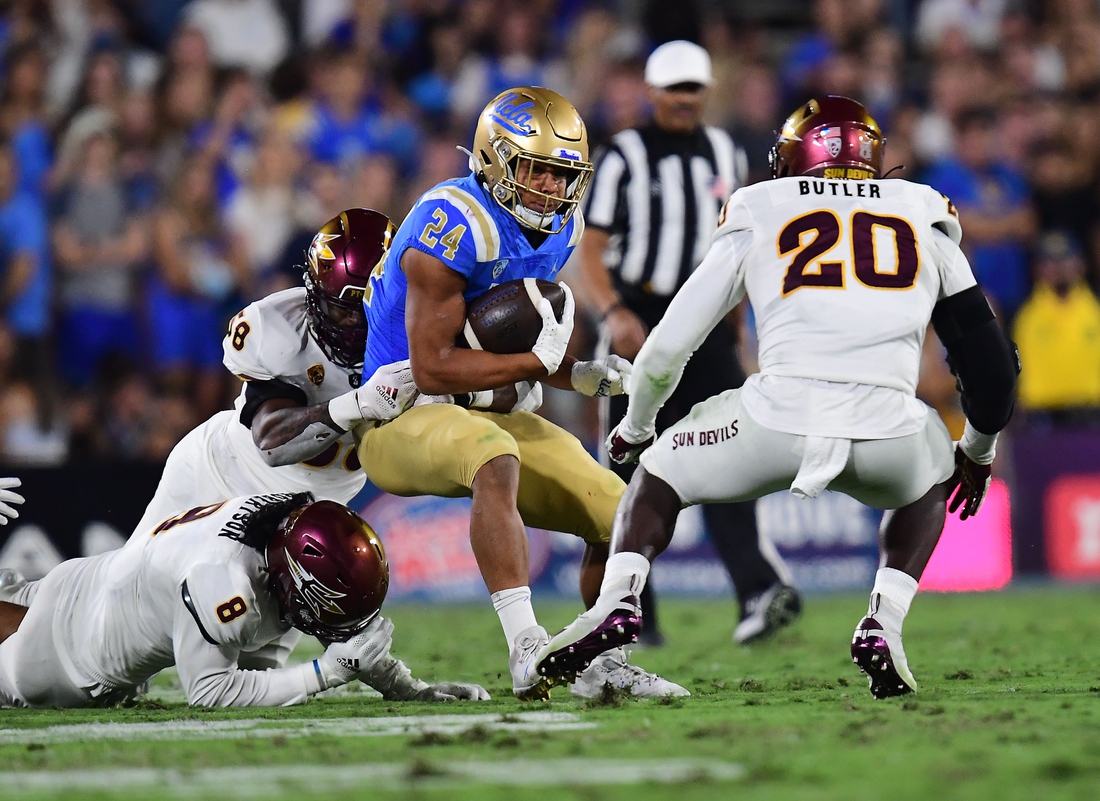 Jayden Daniels passed for 286 yards, connecting on two long touchdown passes to Ricky Pearsall, as Arizona State took over sole possession of first place in the Pac-12 South by beating No. 20 UCLA 42-23 on Saturday night in Pasadena, Calif.

Daniels completed 13 of 18 passes and also ran for 45 yards on six carries. Pearsall had scoring grabs of 65 and 54 yards in the second quarter. Rachaad White and DeaMonte Trayanum combined to rush for 131 yards and three touchdowns for ASU (4-1, 2-0 Pac-12).

UCLA (3-2, 1-1) was held scoreless in the second half, squandering a key scoring chance early in the fourth quarter. ASU’s Eric Gentry stuffed Dorian Thompson-Robinson on a quarterback keeper on fourth-and-1 from the 2.

The Sun Devils then marched 96 yards on 11 plays to go up 39-23, capped by White’s 1-yard run. Daniels fueled the drive on the first play by rolling out and hitting Curtis Hodges for a gain of 48 yards.

Cristian Zendejas finished the scoring with a 32-yard field goal with 2:41 to go.

Thompson-Robinson was 21 of 32 passing for 235 yards and a touchdown, and he also led the Bruins in rushing with 93 yards on 18 attempts. UCLA tight end Greg Dulcich caught nine passes for 136 yards.

Arizona State led 24-23 at halftime and scored the only points of the third quarter when White broke free for a 49-yard touchdown run, followed by a two-point conversion, with 13:32 to go in the quarter.

The Bruins took a 10-3 lead on the first play of the second quarter, when Thompson-Robinson fired a 3-yard pass into the end zone for Kyle Philips.

Arizona State answered with Trayanum’s 6-yard scoring run, and the speedy Pearsall twice countered UCLA scores. He turned a wide receiver screen into a 65-yard romp and hauled in a deep pass for a 54-yard touchdown and a 24-20 lead with 2:44 to go before halftime.

That appeared to be how the half was going to end, but ASU muffed a punt in the final seconds, setting up UCLA for a 26-yard field goal on the final play.