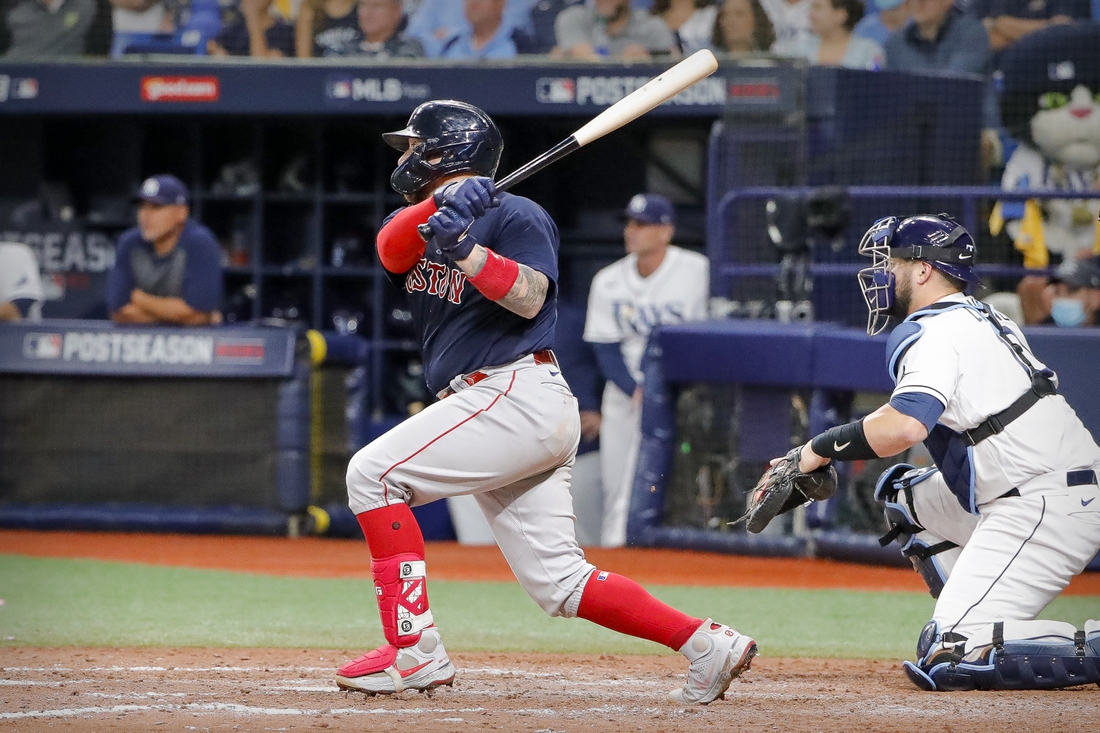 J.D. Martinez hit a tiebreaking three-run homer in the fifth inning and collected four hits in his return to action as the Boston Red Sox routed the Tampa Bay Rays 14-6 in Game 2 of the American League Division Series on Friday in St. Petersburg, Fla.

The Red Sox leveled the series at a game apiece behind 20 hits, including five from Enrique Hernandez, tying the all-time postseason record.

“The Red Sox, we knew coming in, they had a very talented offense and they just put together a lot of at-bats, quality at-bats consecutive with guys on base and just kind of put it to us tonight,” Rays manager Kevin Cash said.

Game 3 is Sunday afternoon in Boston.

Martinez sat out Tuesday’s wild-card game against the New York Yankees and the ALDS opener due to a sprained left ankle. He put Boston up 8-5 when he drove a 2-2 slider from Matt Wisler over the center field fence just out of the reach of Kevin Kiermaier’s leaping attempt.

“You can’t have much of a better night than that,” Red Sox reliever Tanner Houck said of Martinez. “A big home run, absolutely lacing balls in the gap for doubles. … Truly an unbelievable performance, and (he) stepped up in one of the biggest stages in the season so far.”

Hernandez hit a game-tying homer off Collin McHugh (0-1) to start the fifth after Xander Bogaerts and Alex Verdugo hit back-to-back homers in the third. Rafael Devers padded the lead with a two-run blast in the eighth.

Hernandez finished with three doubles, a homer and a two-run single in the ninth. Bogaerts, Verdugo and Christian Vazquez had three hits apiece as the Red Sox, who went 9-for-18 with runners in scoring position, overcame a 5-2 deficit.

Hernandez produced the 10th five-hit game in postseason history. The most recent was by Los Angeles Dodgers catcher Will Smith in Game 3 of last year’s National League Division Series against the San Diego Padres.

Jordan Luplow hit a grand slam to cap a five-run first inning for the Rays. Ji-Man Choi homered in the sixth after umpires confirmed a fan in the left field seats did not interfere.

For the second straight game, the Red Sox got a short outing from their starter. After Eduardo Rodriguez lasted 1 2/3 innings Thursday, Chris Sale was lifted after allowing five runs on four hits in a 30-pitch opening frame.

Sale allowed a grand slam for the first time with Boston when Luplow followed Yandy Diaz’s RBI single by blasting an 0-2 fastball into the left field seats to put Tampa Bay ahead 5-2.

“We’ve been behind (three runs) plenty of times,” Red Sox manager Alex Cora said. “Offensively, I think we’re getting to who we are and it was just a 3-0 game in the second inning, that’s the way we saw it.”

Houck (1-0) followed Sale by allowing one run on two hits in five innings. He struck out five, walked none and was aided by Verdugo reaching into the left field stands to catch a foul pop by slugger Nelson Cruz to start the sixth.

“What happened, I think, was Tanner Houck,” Cash said. “He was really tough. I know he had all of his stuff working. He looked like he had a great breaking ball. Just kept us off-balance but he was tough.”

Boston’s Ryan Brasier struck out the side in the seventh, Hansel Robles tossed a scoreless eighth and Matt Barnes finished up.