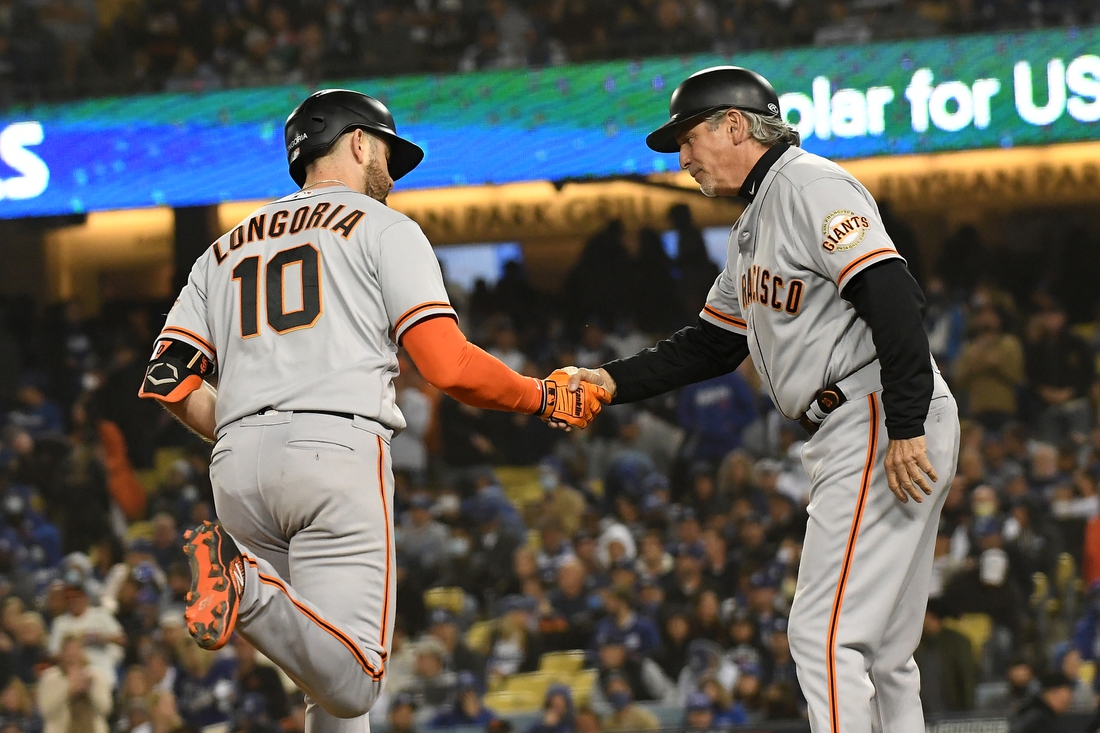 Evan Longoria’s fifth-inning home run was all the offense the San Francisco Giants needed as they moved one victory away from a spot in the National League Championship Series with a 1-0 victory Monday over the host Los Angeles Dodgers.

The Giants’ 2-1 series lead has come on the back of a 4-0 victory at home in Game 1 on Friday and Monday’s tight triumph on a wind-swept Los Angeles night when the Dodgers managed five hits. The Giants won with just three hits.

Los Angeles starter Max Scherzer (0-1) gave up three hits and one walk while striking out 10 over seven innings, but an 0-2 fastball to Longoria was his undoing. Longoria’s homer into the left field seats cut through a cross wind.

“(Scherzer) had some pretty good stuff at the top of the zone and was executing pitches really well,” Longoria said. “I have just been telling myself after every game, I just need to put one good swing on a ball, and tonight it was the difference.”

Asked about the possibility of the wind keeping the ball in the park, Longoria said, “I was going to walk home if that ball didn’t go out because I hit it as hard as I could.”

Scherzer said, “You get to the postseason, you can always lose by one pitch. That comes into play. And tonight I lost on one pitch.”

The Dodgers lost for the first time with Scherzer on the mound, a total of 13 starts in the regular season and playoffs since he was acquired July 30 from the Washington Nationals. The loss ended the Dodgers’ 16-game home winning streak, including Wednesday’s wild-card game against the St. Louis Cardinals.

Scherzer said of the conditions Monday, “I didn’t realize how much the wind was going to affect me. The wind was really pushing me toward home plate. It was pretty strong tonight. Once I was able to get through the second inning, that’s when I felt like I found some rhythm and was able to start executing pitches. I feel like that is what made for a good outing.”

Albert Pujols had two hits in two-at bats in his first start of the series for the Dodgers and his first start in a playoff game since 2014 as a member of the Los Angeles Angels. Pujols’ hits were the only two allowed by Wood, who walked two and struck out four.

Wood was followed by right-hander Tyler Rogers (1-0), who gave up three hits over 1 2/3 scoreless innings. Jake McGee retired both batters he faced and Camilo Doval tossed two perfect innings for the Giants in the first playoff series between the longtime NL rivals.

Doval earned the save, ending the game by getting pinch hitter Gavin Lux to fly out to the warning track in left-center.

The Dodgers had their best opportunity to score in the seventh with runners on first and second and one out. However, McGee entered and struck out pinch hitter Austin Barnes before Mookie Betts lined out to leaping Giants shortstop Brandon Crawford.

Los Angeles manager Dave Roberts said of his team’s offense, “If you look at tonight, obviously the result was we got shut out, but I do think that tonight there were some good at-bats. … We took some good at-bats and we just didn’t get rewarded. So I thought collectively we did a better job, better than the goose eggs we put up.”

Game 4 is scheduled for Tuesday in Los Angeles. Game 5, if necessary, would be played Thursday in San Francisco.