MLB: Braves shut out Brewers behind Max Fried, even up NLDS 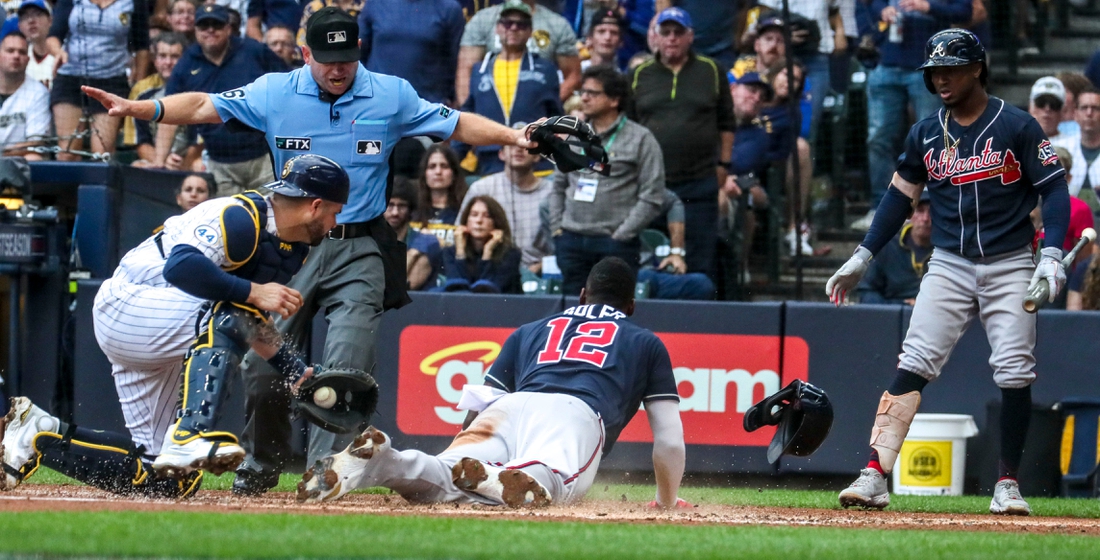 Max Fried allowed three hits over six scoreless innings and the Braves mustered enough timely hitting for a 3-0 victory over the host Milwaukee Brewers on Saturday, sending the National League Division Series to Atlanta tied at a game apiece.

“We’ve got two at home,” Braves manager Brian Snitker said. “So, we like our chances. Obviously we like playing at home. So we’re going to go back to Atlanta and get ready for this stretch and try to win the best two out of three.”

Fried was in control throughout, yielding singles in the second and fourth, and a two-out double to Willy Adames in the sixth. Fried, who won his last seven decisions to finish 14-7, struck out nine with no walks.

“I think the last year’s postseason experience probably was great for him today,” Snitker said. “You can just see Max. I mean, as the game wears on, I mean he just feeds into it. I mean he’s, like you say, really good. He’s been really good for a long time now.

“And it was fun to watch. He’s fun to watch when he’s got it going, because he pitches. I mean, he’s got the arsenal, the assortment, spins the ball so well. And it was a great outing.”

Milwaukee had two runners on in each of the three final innings but failed to convert.

“Yeah, gave ourselves a chance,” Brewers left fielder Christian Yelich said. “And that’s what you want in those situations when you’re chasing a few runs. Just give yourself a chance to tie it with one swing of the bat. And it didn’t really work out for us tonight. But it happens. We kept after it, kept putting the pressure on them and they did a good job making pitches when they had to.”

Atlanta, whose only run in Friday’s 2-1 opening loss came on Joc Pederson’s pinch-hit homer in the eighth, bunched three consecutive hits for two runs in the third inning off Brandon Woodruff.

Jorge Soler doubled with one out and Freddie Freeman followed with an RBI single to right. Ozzie Albies then doubled off the top of the wall in right.

Austin Riley, who had 33 homers during the regular season, put the Braves up 3-0 with a 428-foot solo homer to right-center with one out in the sixth.

The Brewers threatened in the seventh when Luis Urias singled with two outs and Lorenzo Cain walked, but Tyler Matzek relieved and struck out pinch-hitter Tyrone Taylor.

Jace Peterson walked and Kolten Wong singled to open the Brewers eighth, but Matzek retired the next three.

Will Smith, who converted 37 of 43 save opportunities this season, allowed a walk and single to open the ninth, but got a fly out and double play for the save.

Milwaukee again offered little support for Woodruff, who was 9-10 despite a 2.56 ERA that was fourth-best in the majors. Woodruff allowed three runs on five hits in six innings, striking out seven and walking one.

“I thought it went well,” Woodruff said. “Runs matter in the postseason. You can’t always be perfect. Basically two pulled change-ups. Albies did a good job. It was well below the zone, and he was able to get a barrel on it.

“And the one to Riley kind of just stayed middish and that’s kind of what he hits really well. And it was not executed. So, you tip your hat to them. They put up some good at-bats.”

Rowdy Tellez’s two-run homer Friday accounted for the only Brewers runs in the two games.

The series resumes Monday in Atlanta. Right-hander Ian Anderson (9-5, 3.58 ERA) is scheduled to start for the Braves, while Milwaukee has not named a starter. Right-hander Freddy Peralta (10-5, 2.81 ERA) has been the Brewers usual third starter.