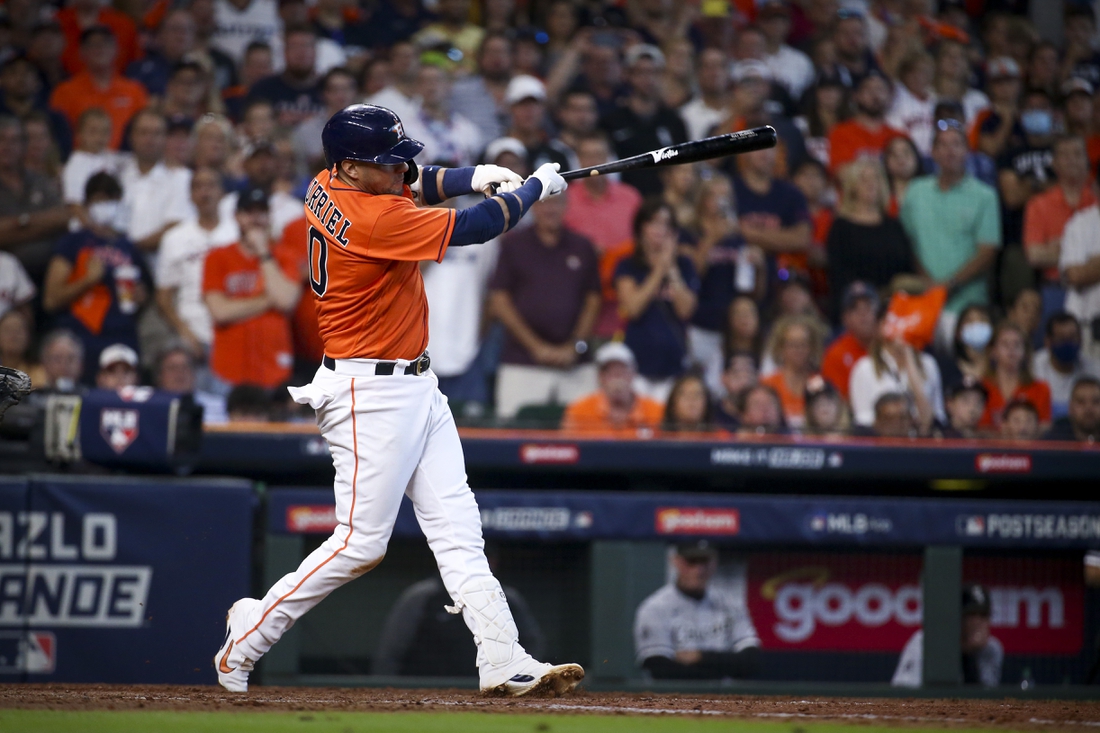 Yordan Alvarez delivered the go-ahead RBI single and Kyle Tucker hit a two-run homer to cap a five-run seventh inning Friday afternoon for the host Houston Astros, who took a commanding lead in the American League Division Series by beating the Chicago White Sox 9-4 in Game 2 of the best-of-five set.

The Astros will take a 2-0 series lead to Chicago for Game 3, scheduled for Sunday.

Only 10 baseball teams have come back from an 0-2 deficit to win a best-of-five series, most recently the New York Yankees against the Cleveland Indians in the 2017 AL Division Series.

“We completed the objective, which was to win two games here at home,” Houston first baseman Yuli Gurriel said through an interpreter. “Now we find ourselves in a good position heading to Chicago.”

The White Sox, who never led in a 6-1 loss in Game 1 Thursday, scored three runs in the fifth — via RBI singles by Luis Robert and Jose Abreu and a sacrifice fly by Yasmani Grandal — to take a 4-2 lead.

But the Astros wasted no time beginning to come back against the White Sox, who were 85-10 in regular season games in which they held a two-run lead. Chicago starter Lucas Giolito issued a leadoff walk to Jose Altuve and exited after walking Alex Bregman with one out. Garrett Crochet entered and walked Alvarez before giving up a two-run single to Gurriel.

The top of the order again keyed the go-ahead surge against Aaron Bummer (0-1) in the seventh. Altuve led off with a single against Bummer and Michael Brantley struck out before Bregman singled Altuve to third. Alvarez followed with an RBI single to chase Bummer.

Craig Kimbrel retired Gurriel on a liner to right before Carlos Correa laced a two-run double. Tucker then hit a long homer to left on a 1-0 pitch, making it 9-4.

“The score to me is very misleading,” White Sox manager Tony La Russa said. “We got hurt with some walks. That’s one of the things they do really well — they have good strike zone understanding, so they’ll take a walk. And walks hurt us.”

It was the third RBI of the game for Tucker, who opened the scoring for the Astros with an RBI single in the second. Chas McCormick gave Houston a 2-1 lead with a sacrifice fly.

Ryne Stanek (1-0), the fourth of six Astros pitchers, allowed one hit and one walk and struck out two in the seventh.

Eloy Jimenez put the White Sox ahead 1-0 with a run-scoring fielder’s choice in the first.