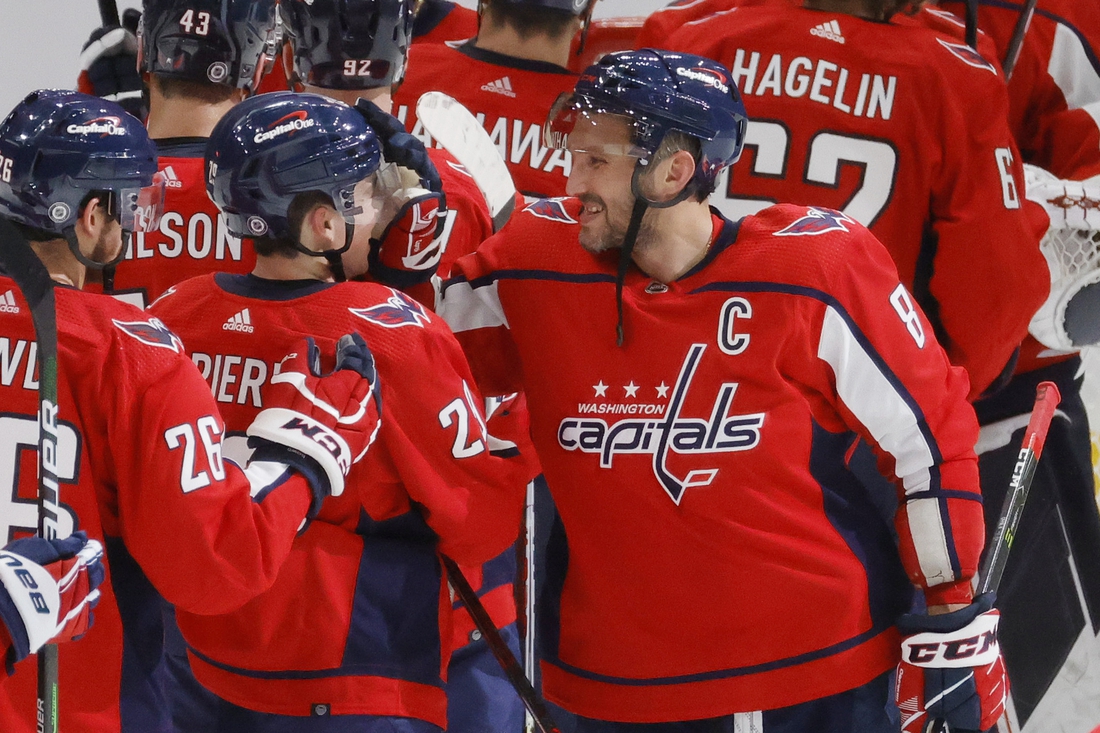 Alex Ovechkin scored twice in the third period to move into sole possession of fifth place on the NHL’s all-time goal list Wednesday night, leading the Washington Capitals to a 5-1 win over the visiting New York Rangers in the season opener for both teams.

Ovechkin, who signed a five-year contract with the Capitals in July, is nine goals away from tying Brett Hull for fourth place and 162 goals behind the all-time leader, Wayne Gretzky.

The win also produced a milestone for Capitals coach Peter Laviolette. He earned his 674th win behind the bench, breaking the mark he shared with John Tortorella for the most wins by an American-born coach.

William Nylander scored the go-ahead goal early in the third period and Toronto defeated visiting Montreal in the season opener for both teams.

Nylander’s decisive shot came from the right circle at 1:06 of the third period. Morgan Rielly and Mitchell Marner had the assists. Pierre Engvall scored a power-play goal for Toronto after Montreal’s Jonathan Drouin produced the game’s first tally.

Maple Leafs goalie Jack Campbell made 31 saves while the Canadiens’ Jake Allen stopped 28 shots. The Canadiens eliminated the Maple Leafs with a seven-game victory in the first round of the playoffs last season.

Gabriel Landeskog, Bowen Byram and Nazem Kadri each had a goal and an assist, Jack Johnson also scored, and Colorado beat Chicago in Denver.

Colorado scored the first three goals in a game that was the season opener for both teams. Darcy Kuemper made 32 saves for Colorado, which played without head coach Jared Bednar and center Nathan MacKinnon, both away from the team due to COVID-19 protocols.

Kyle Turris scored the winning goal in the fifth round of the shootout to give host Edmonton a victory over Vancouver in both teams’ season opener.

Jesse Puljujarvi and Zach Hyman also tallied for the Oilers, who received a 36-save performance from goaltender Mike Smith, on top of stopping four of five opponents in the shootout. Oilers captain Connor McDavid collected two assists.

The Canucks erased a 2-0 deficit with third-period goals from Oliver Ekman-Larsson and Quinn Hughes. Vancouver goalie Thatcher Demko made 32 saves.

Mason McTavish had a goal and an assist in his NHL debut, John Gibson made 33 saves and Anaheim beat visiting Winnipeg in the season opener for both teams.

Kevin Shattenkirk, Adam Henrique and Rickard Rakell added goals for the Ducks, whose positive start comes after a season in which they had the second-lowest points total in the NHL, 43. The Ducks killed off all five Jets power plays.

McTavish not only became the second-youngest Ducks player to make his debut at 18 years and 256 days, but he became the youngest to score a goal for Anaheim. Kyle Connor scored a goal for the Jets, and Connor Hellebuyck stopped 18 shots.