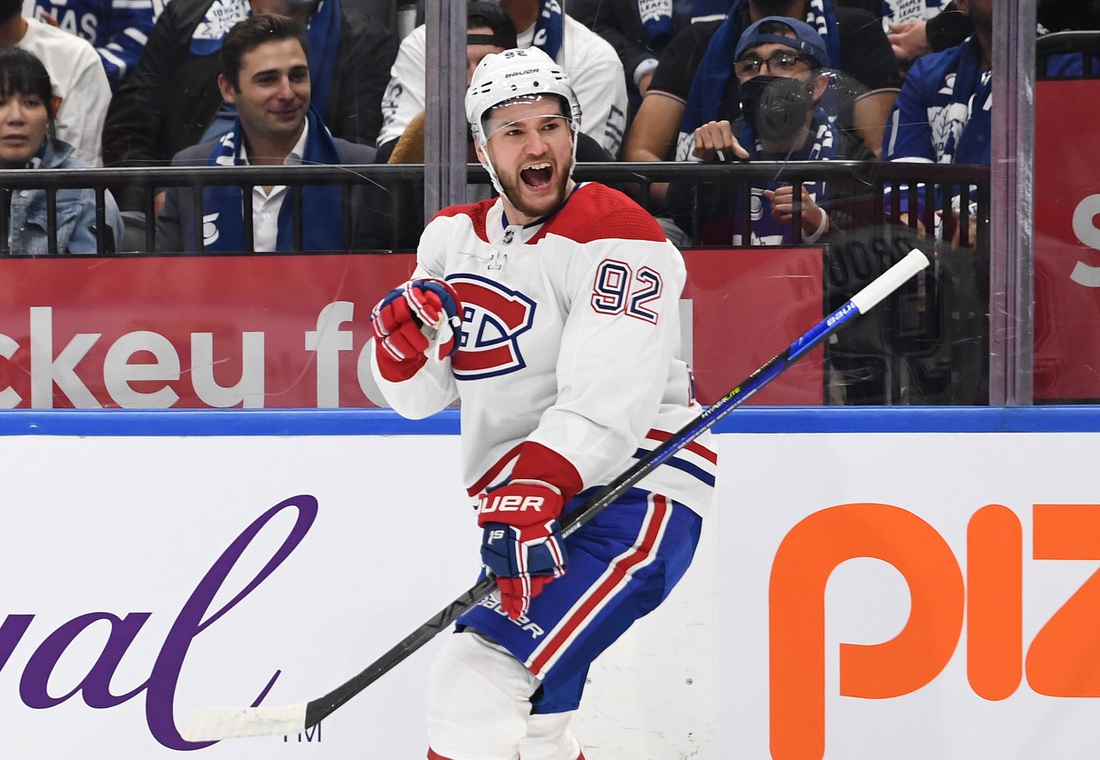 There weren’t many reasons for the Montreal Canadiens to enjoy their season-opening 2-1 loss to the Toronto Maple Leafs on Wednesday.

However, as the Canadiens head into a Thursday road clash against the Buffalo Sabres, they at least have positive feelings from forward Jonathan Drouin scoring in his return to the team.

Buffalo will be playing its first game of the campaign.

Drouin, who left the team late in the 2020-21 regular season and missed his team’s run to the Stanley Cup Final due to anxiety and insomnia, netted Montreal’s lone goal against the Maple Leafs.

“It was a nice to get one, but would have been nice to get the two points,” Drouin said. “My head’s clearer. I’m more in the game, more focused. I’m more ready when the game’s there. I don’t want to go into details, but going to the rink was definitely a different experience for me than in the last couple of years.”

The Canadiens, who will be without starting goalie Carey Price for at least the opening month and likely captain Shea Weber the whole season, will look to find a victory against a Sabres team pegged to again finish at the bottom of the league standings.

“Some things we all want to improve on, from myself out. We didn’t get the win, and that’s the main thing,” Montreal goalie Jake Allen said. “It’s still the first game. I know these are crucial points — every point matters, especially divisional games — but we will get better, hone on and be ready (Thursday).”

The Sabres, who are in yet another rebuild and mired in a standoff with their top player, Jack Eichel, are well aware most prognostications have them expected to be the worst team in the league. With another poor season, they would miss the playoffs for an NHL-record 11th consecutive season.

“You take it and use it as motivation, but I’m not going to listen to them talk about us like that,” forward Casey Mittelstadt said when asked whether the pundits have Buffalo pegged as a bottom-feeder. “It doesn’t matter. I’m not gonna waste my time.”

It’s obvious how the Sabres can silence the critics: win games. Buffalo does have a plethora of young, talented players. What remains to be seen is whether those youngsters can succeed in the NHL.

“Everyone has to show up,” said Rasmus Dahlin, a 21-year-old defenseman heading into his fourth NHL season. “You were talking about Eichel and those guys — but now it’s everyone. We’ve got to really work to score, and we’ve got to do it together.”

Simply creating a positive atmosphere for the beleaguered franchise would be a step forward.

“The group is learning, they are learning on the go,” Buffalo goaltender Craig Anderson said. “A very simple message that I can kind of pass on is don’t compound mistakes. It’s OK to make a mistake. Make it with aggression. At the end of the day, your teammates are there to kind of back you up.

“If we can play free — not carefree, but play with a little bit less attention — I think you’ll see better results with the guys growing as individuals and as a group.”