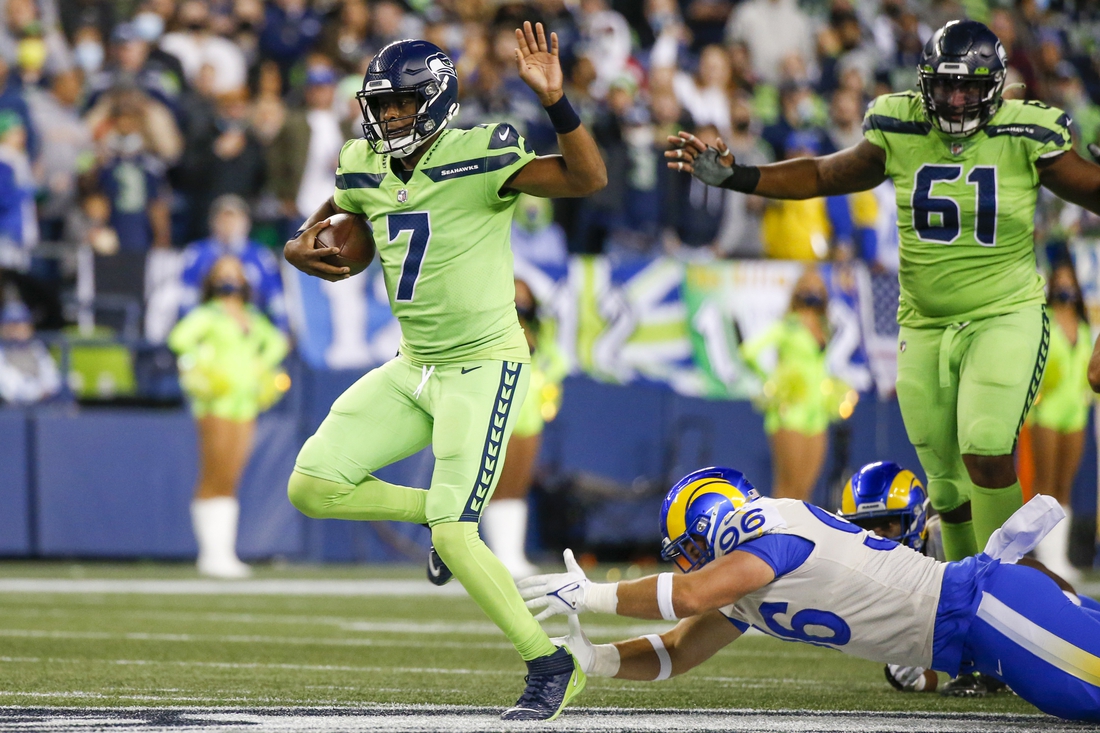 Trivia question: Who was the last quarterback to start a regular-season game for the Seattle Seahawks other than Russell Wilson?

The answer would be Tarvaris Jackson in the final game of the 2011 season.

Wilson’s ironman streak likely will end Sunday, though, when the Seahawks (2-3) visit the Pittsburgh Steelers (2-3).

Wilson underwent surgery Oct. 8 on his right middle finger because of an injury sustained the previous night in a 26-17 loss to the Los Angeles Rams.

Wilson, who had started all 165 games — regular season and playoffs — since arriving as a rookie in 2012, suffered a ruptured tendon in what is often referred to as mallet finger and a fracture/dislocation of the joint at the top of the finger.

With Wilson almost certain to miss the Steelers game, Geno Smith will make his first start since 2017.

Smith has been getting instruction from Wilson on the practice field this week.

“(Wilson) knows his job is to help Geno and get him ready,” Seahawks coach Pete Carroll said.

Smith played the fourth quarter against the Rams, completing 10 of 17 passes for 131 yards and a touchdown while leading two scoring drives. He threw a late interception after his intended target, Tyler Lockett, ran into a defender and fell down.

“Everybody believes that (Smith is) going to come through and do a great job, just like he showed the other night,” Carroll said. “So we need to support him and give him the help he needs by playing good ball around him and coaching real well around him and be really excited to see what the outcome is.

“I think there’s a lot of things that change in a young guy’s mind when he gets this opportunity, but (Smith has) been there a lot. It’s just been awhile. … He loves the fact that he’s got this chance to help his team. That’s why he’s been here. He’s been here for this opportunity when it does arise.”

The Steelers snapped a three-game skid with a 27-19 victory against the Denver Broncos last week. Rookie Najee Harris rushed for 122 yards and a touchdown on 23 carries and Ben Roethlisberger completed 15 of 25 passes for 253 yards and two TDs.

It was a costly victory, however, as wide receiver JuJu Smith-Schuster sustained a dislocated shoulder and underwent season-ending surgery Wednesday.

Chase Claypool helped pick up the slack vs. the Broncos with five catches for 130 yards and a touchdown.

“Everybody (in the wide receivers room) is capable of playing and contributing to the offense, so we are not worried about that,” Steelers receiver Diontae Johnson said. “We are still going to go out there and play for JuJu.”

Steelers linebacker Devin Bush, who left last Sunday’s game with a groin injury, was back as a full participant in practice this week, as was defensive back Cam Sutton (groin), who didn’t face Denver. Claypool (hamstring) and fellow receiver James Washington (groin) were limited on Wednesday.