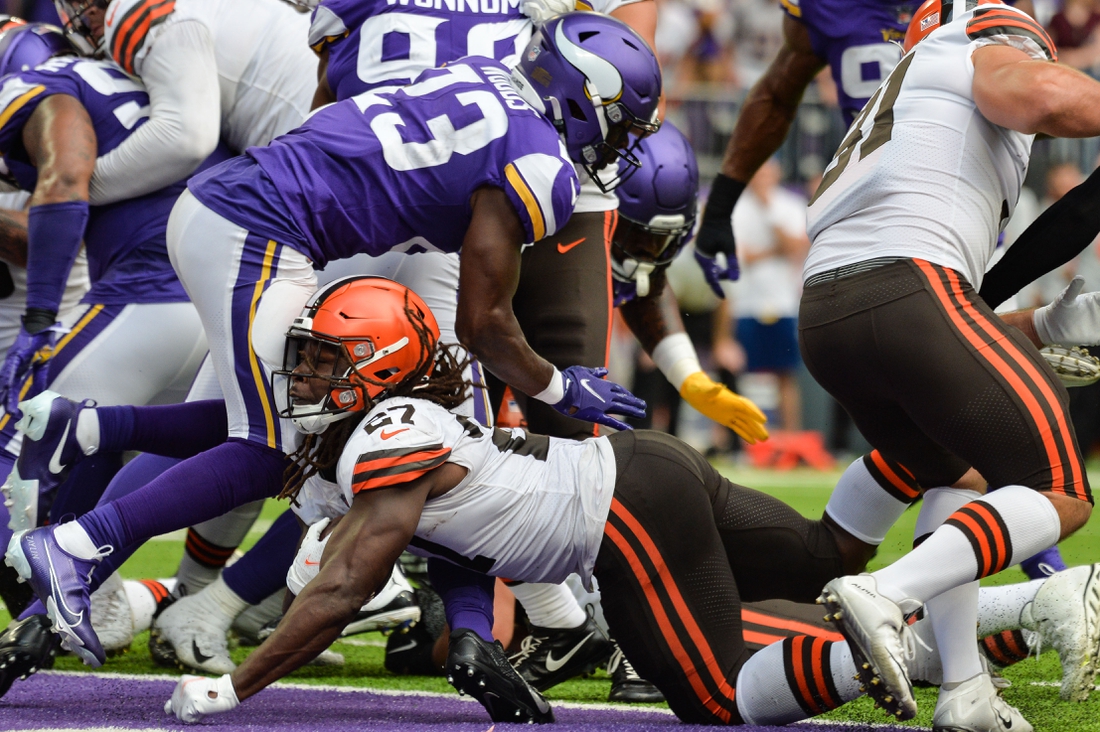 The visiting Cleveland Browns turned in another stellar defensive effort and held on for a 14-7 win over the Minnesota Vikings on Sunday at Minneapolis.

Quarterback Baker Mayfield struggled — hitting just 15 of 33 passes for 155 yards — but the Browns (3-1) climbed into a tie for first in the AFC North with their third straight win behind a rugged running game. Nick Chubb rushed for 100 yards on 21 carries, and Kareem Hunt added 69 yards and a touchdown on 14 carries.

The Vikings (1-3) were held to 255 total yards and never crossed the Cleveland 20-yard line after their first possession. Kirk Cousins finished 20-of-38 passing for 203 yards with a touchdown and an interception as the Vikings never got the running game on track. Dalvin Cook was held to 34 yards on nine carries.

Justin Jefferson led all receivers with six catches for 84 yards and the touchdown.

Up 11-7 at the half, Cleveland extended the lead to 14-7 with 6:16 remaining after Chase McLaughlin connected on a 53-yard field goal.

On the Vikings’ next offensive play, Cousins’ deep attempt to Adam Thielen was picked off by cornerback Greedy Williams — who started in the place of injured rookie Greg Newsome II. It was the first interception in 226 attempts for Cousins, and the first of Williams’ career.

Minnesota drove to the Cleveland 33-yard line on its next possession, but the Browns pressured Cousins into a pair of incompletions on third and fourth down to end the possession.

Minnesota was sharp out of the gate, with Cousins hitting his first six passes, and took a 7-0 lead on the game’s first possession. Cousins hit Justin Jefferson with a 12-yard touchdown to cap a 14-play, 75-yard drive that took off half the first quarter clock. It was Cousins’ 100th TD pass with the Vikings.

The Vikings notched 80 yards of offense on that initial possession, but tallied only 175 more the rest of the way. Cleveland finished with 327 total yards, and outgained Minnesota on the ground 184-65.

The Browns were scoreless until late in the first half. After a defensive holding penalty gave Cleveland a first down on the 1-yard line, Hunt plowed in for a 1-yard score with 1:16 left. After the Vikings called a timeout they didn’t have on the extra point, Cleveland converted a two-point conversion from the 1-yard line when Mayfield flipped it to Andy Janovich for an 8-7 lead.

Cleveland tacked on a 48-yard field goal by McLaughlin with two seconds left in the half for an 11-7 lead at the break.