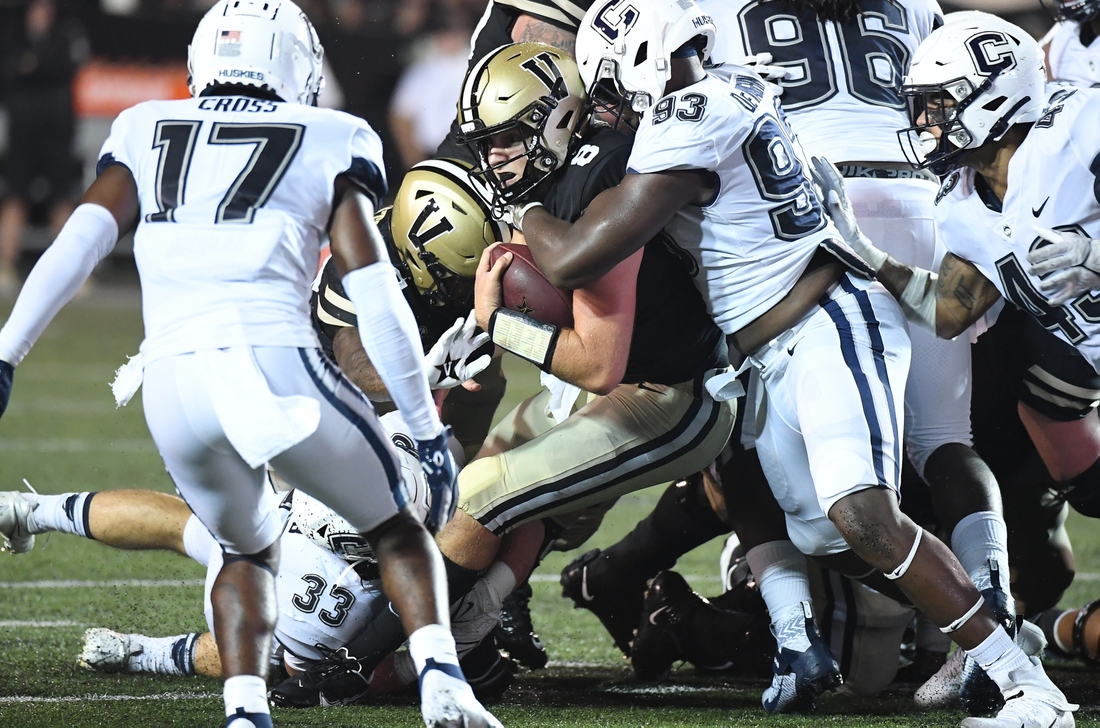 Joseph Bulovas kicked a 31-yard field goal as time expired to lift host Vanderbilt to a 30-28 win over UConn on Saturday in Nashville, Tenn.

Quarterback Steven Krajewski scored on a 17-yard touchdown run to give the Huskies (0-6) a 28-27 lead with 1:07 remaining in the fourth quarter. The Commodores (2-3) answered by converting a fourth-and-4 play before a pass interference penalty advanced the ball 15 yards prior to Bulovas splitting the uprights to end the team’s eight-game home losing skid.

Ken Seals completed 27 of 40 passes for a season-high 333 yards, including scoring strikes of 26 and 38 yards to Will Sheppard. Sheppard finished with eight catches for 119 yards, while Chris Pierce Jr. had nine catches for 103 yards.

Krajewski replaced injured starter Tyler Phommachanh (leg) to throw for 264 yards and two touchdowns. He tossed a 32-yard reception to Kevens Clercius on fourth-and-18 on UConn’s final drive before he scored his first career rushing touchdown.

Nathan Carter rushed for 123 yards and Keelan Marion had four catches for 102 yards and a touchdown for the Huskies, who have lost 10 straight games since posting a 56-35 win over UMass on Oct. 26, 2019.

UConn was unable to take advantage of a pair of prime opportunities in the third quarter with Vanderbilt clinging to a 17-16 lead. Bulovas responded by making a 27-yard field goal early in the fourth quarter to boost his team’s advantage to 20-16.

An interception by Maxwell Worship set up Vanderbilt’s next touchdown, with Sheppard shaking off an attempted tackle before trotting into the end zone.

Krajewski answered by tossing an 8-yard touchdown pass to Clercius in corner of the end zone with 5:21 remaining in the fourth quarter. The two-point conversion attempt failed, keeping Vanderbilt’s lead at 27-22.

Sheppard gained a step on UConn’s Jeremy Lucien and reeled in a pass from Seals to give the Commodores a 10-6 lead early in the second quarter.

Joe McFadden drilled a 31-yard field goal to trim the deficit before Vanderbilt extended its cushion on the next possession. Rocko Griffin plowed his way home from 1 yard out to cap a 13-play, 77-yard drive, however Marion reeled in an underthrown ball on a fourth-down post route for a 40-yard TD, trimming the Commodores’ lead to 17-16.