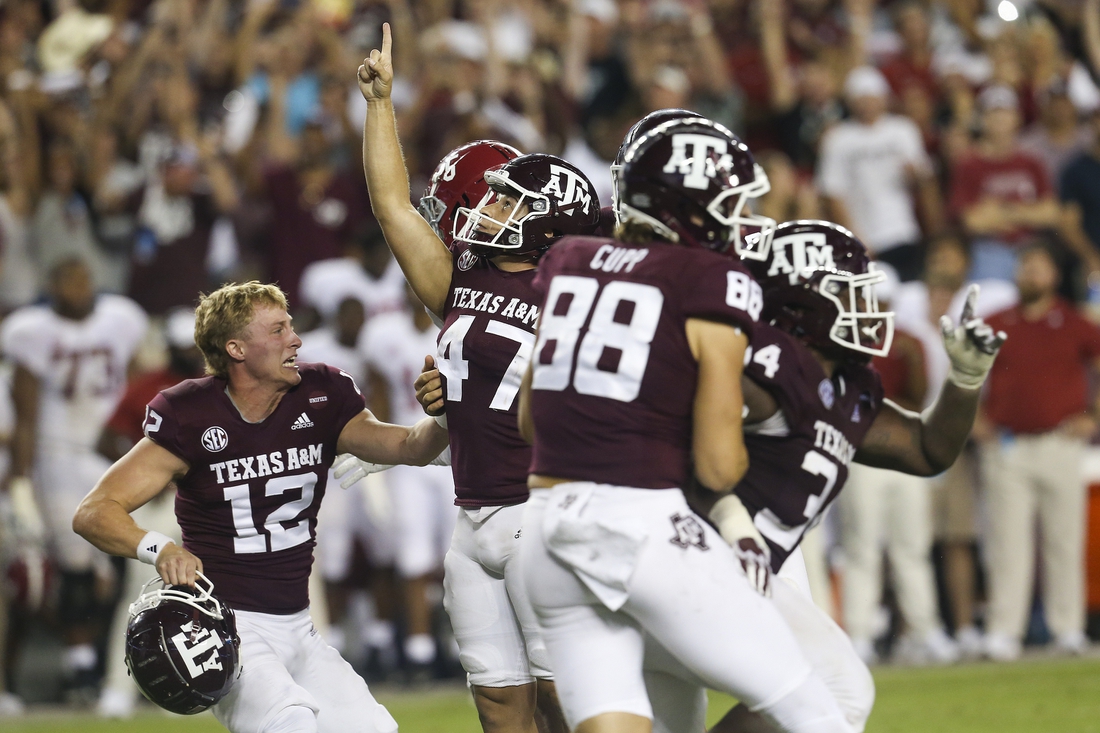 The Aggies (4-2, 1-2 SEC) drove 54 yards in the final 2:08, with a pass interference call putting Small in chip-shot range. His kick hooked inside the left upright, making Jimbo Fisher the first ex-Nick Saban assistant to beat his old boss in 25 attempts.

Freshman quarterback Zach Calzada completed 21-of-31 passes for 285 yards and three touchdowns with one interception, tying the game at 38 on a 25-yard scoring strike to Ainias Smith with three minutes left in the game.

Alabama quarterback Bryce Young hit on 28-of-48 passes for 369 yards and three scores with one interception. His 7-yard touchdown toss to Jameson Williams with five minutes remaining gave the Tide (5-1, 2-1) a 38-31 advantage, but their defense couldn’t finish it off.

Stetson Bennett went 14-for-21 passing for 231 yards and two touchdowns to lead the Bulldogs over the host Tigers.

Ladd McConkey had five catches for 135 yards and a score, with Zamir White adding 79 yards and two touchdowns on 18 carries for the Bulldogs (6-0, 4-0 SEC), who remained undefeated.

Spencer Petras and Nico Ragaini hooked up on a 44-yard touchdown pass with 6:26 remaining as the Hawkeyes rallied past the Nittany Lions in a Big Ten battle at Iowa City.

Iowa’s Charlie Jones also scored a touchdown and Caleb Shudak kicked three field goals in a rare top-five matchup for each school. The Nittany Lions hadn’t played in a top-five showdown since 1999, while the Hawkeyes hadn’t hosted a matchup of top-five squads since 1985.

Despite trailing 17-3 in the second quarter, Iowa (6-0, 3-0 Big Ten) chipped away at the deficit while Penn State (5-1, 2-1) struggled without quarterback Sean Clifford, who exited early in the second quarter with an undisclosed arm injury. The Hawkeyes got within 17-10 at halftime but later trailed by 10 before Shudak kicked a 48-yard field goal late in the third quarter and booted another one from 36 yards out with 8:08 remaining to make it 20-16.

Kennedy Brooks ran for 217 yards and two touchdowns, including a 33-yarder in the waning seconds, to lift the Sooners to a win over the Longhorns in Dallas.

Texas (4-2, 2-1 Big 12) held a big lead early, but the Sooners rallied to take a fourth-quarter advantage after Texas’ Casey Thompson hit Xavier Worthy for a 31-yard touchdown with 1:23 left.

Oklahoma (6-0, 3-0), with freshman Caleb Williams at quarterback, quickly drove into field-goal territory. Brooks didn’t leave it up to kicker Gabe Brkic, however. He took a direct snap on first down and powered his way into the end zone to cap his big day.

His fifth touchdown pass against Maryland) was a 30-yarder to Chris Olave in the third quarter to give the Buckeyes a 49-10 lead. Stroud finished 24 of 33 for 406 yards.

Jake Moody kicked the game-winning 39-yard field goal with 1:24 left to lift the Wolverines to a win against the Cornhuskers in Lincoln.

Moody tied the game at 29-29 with 3:00 left on a 31-yard field goal, and then the Wolverines recovered a fumble by Nebraska quarterback Adrian Martinez to set up his game-winner.

Hank Bachmeier passed for 172 yards, and the visiting Broncos (3-3) forced four turnovers to upset the Cougars (5-1) in a nonconference matchup.

Cyrus Habibi-Likio rushed for a season-high 75 yards, and Andrew Van Buren added a season-high 60 rushing yards for the Broncos, who held on after taking a 23-10 lead. Each player added a touchdown as Boise State snapped a two-game losing streak in the series with BYU.

Jaren Hall threw for a career-high 302 yards with one touchdown and one interception for BYU, which outgained Boise State 413 to 312 in total yards.

Payton Thorne connected with Jalen Nailor on three long touchdown passes in the first half to pace the visiting Spartans (6-0, 3-0) to the Big Ten win over the Scarlet Knights (3-3, 0-3).

Thorne completed 16 of 27 passes for 339 yards, and Nailor had five receptions for 221 yards for the Spartans. Kenneth Walker III rushed for 233 yards on 29 carries. His 94-yard touchdown run in the second half was the longest play from scrimmage in school history.

Matt Corral’s 68-yard touchdown pass to Braylon Sanders held up as the Rebels thwarted a potential game-winning two-point conversion from the Razorbacks in Oxford, Miss.

With one second to play, KJ Jefferson tossed a 9-yard touchdown pass to Warren Thompson. Arkansas (4-2, 1-2 SEC) elected to go for the win, however Jefferson’s wild throw fell incomplete to hand Ole Miss (4-1, 1-1) the victory.

After throwing six interceptions and losing a fumble in last year’s 33-21 loss at Arkansas, Corral was sharp in the rematch. He completed 14 of 21 passes for 287 yards with two touchdowns. He also rushed for two scores. Ole Miss totaled 611 yards of offense and was successful on 4-of-5 fourth-down opportunities.

Jonathan Doerer made a 48-yard field goal with 17 seconds remaining to lift the Fighting Irish to a win over the host Hokies in Blacksburg, Va.

Tyler Buchner passed for one touchdown and rushed for another for Notre Dame (5-1). Kyren Williams had one rushing touchdown and one receiving TD for the Fighting Irish.

Raheem Blackshear had one rushing touchdown for Virginia Tech (3-2), which fell to 1-3 in the all-time series. Hokies quarterback Braxton Burmeister completed 14 of 29 passes for 171 yards and an interception.

Will Levis threw for three touchdowns and ran for two more as the Wildcats defeated the Tigers in an SEC game in Lexington, Ky.

Levis, who had just seven completions in Kentucky’s upset win against Florida a week earlier, completed 14 of 17 passes for 145 yards. He had thrown a total of two touchdown passes in three previous SEC games.

Sam Hartman’s third touchdown pass of the game to A.T. Perry went for 22 yards, giving the Demon Deacons an overtime victory against the host Orange.

The Orange (3-3, 0-2) scored first in overtime on Andre Szmytz’s 38-yard field goal. The Demon Deacons won it on their second play of the extra session.

Emory Jones established career highs of 273 passing yards and four touchdowns as the Gators continued their domination of the Commodores in Gainesville, Fla.

Jacob Copeland, Ja’Quavion Fraziars and Trent Whittemore also had scoring receptions for Florida. Rashad Torrence racked up 15 tackles while Trey Dean III and Daquan Newkirk had interceptions for the Gators.

Jordan Kerley hauled in a diving, go-ahead touchdown pass from Tanner Mordecai to help the Mustangs escape Annapolis, Md., with a win over the Midshipmen.

The 22-yard strike came with 8:19 remaining, and the Mustangs’ defense forced two turnovers on downs to keep Navy at bay the rest of the game. SMU (6-0, 2-0 AAC) remained undefeated as Mordecai went 30-for-40 passing for 324 yards, two touchdowns and an interception. The nation’s leader in passing touchdowns now has 26 on the year.

Greg Bell ran for 111 yards and a touchdown, and the Aztecs limited the Lobos to 193 total yards in a win in Carson, Calif.

Quarterback Jordan Brookshire added two rushing scores for the Aztecs (5-0, 1-0 Mountain West Conference) while throwing for 130 yards on 11 of 24 accuracy. San Diego State gained just 336 total yards but was in control almost from the beginning.

The Aztecs’ defense made life difficult for quarterback Terry Wilson Jr., a Kentucky transfer who absorbed four sacks and completed 13-of-25 passes for 127 yards with an interception. The Lobos (2-4, 0-2) rushed for only 66 yards on 34 attempts.