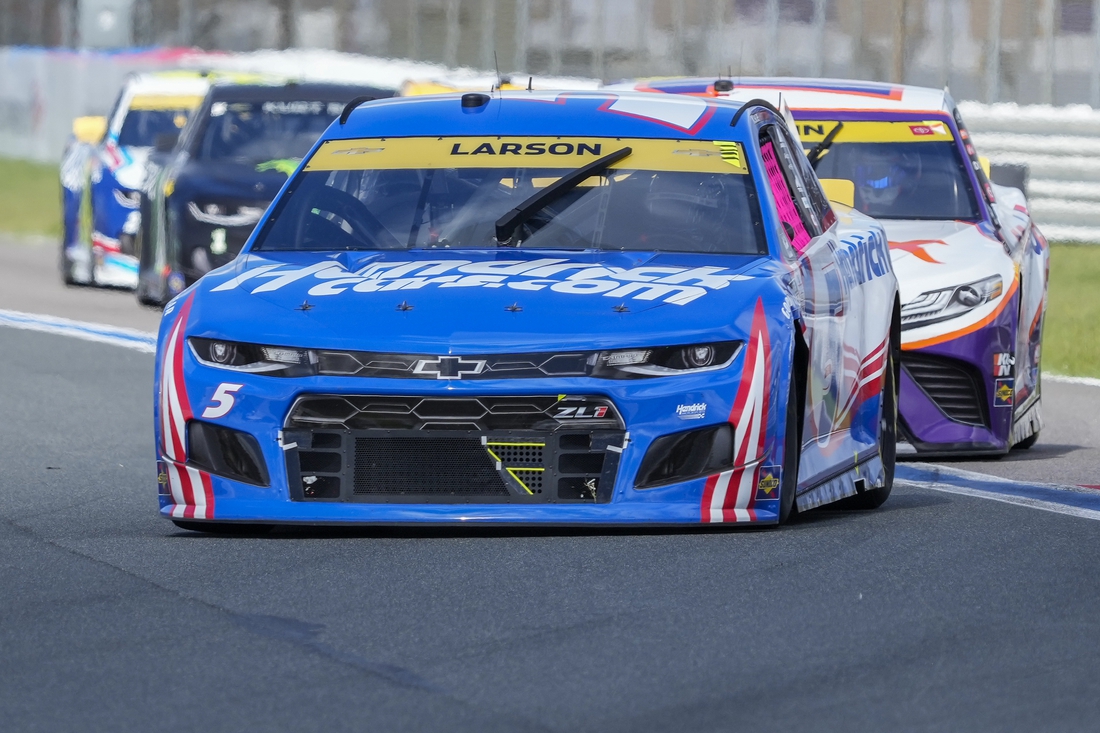 Kyle Larson fought back from early race electrical problems that moved him to the rear of the field, passed Denny Hamlin for the lead with eight laps to go and went on to win Sunday’s NASCAR Cup Series Bank of America 400 at the Roval.

The win was Larson’s series-best seventh of 2021. It was his third win of the year on a road course.

“Just an awesome day for Hendrick Motorsports, logging another win and looking forward to the next round a lot,” Larson said.

“A lot of craziness all day long.”

The race at the 17-turn, 2.32-mile Charlotte Motor Speedway infield road course was the final event of the Playoffs Round of 12 and saw the championship field trimmed from 12 drivers to eight.

Moving into the Playoffs’ Round of 8 are Hamlin, Martin Truex Jr. and Busch of Joe Gibbs Racing, Larson and Chase Elliott of Hendrick Motorsports, Joey Logano, Ryan Blaney and Brad Keselowski of Team Penske.

Eliminated Sunday were Alex Bowman and William Byron of Hendrick Motorsports, Christopher Bell of Joe Gibbs Racing and Kevin Harvick of Stewart-Haas Racing, who was battling for the final Round of 8 berth when he crashed out with 11 laps to go.

Elliott’s hopes for a second straight championship appeared have come to an end just after the halfway point at CMS. He was sitting 14 points above the cutoff line in 16th place when he was rammed from behind by Harvick and sent into the wall tail first. His car suffered big damage. Elliott’s team worked on the car, sent it out of the pits and stayed on the lead lap but 10 points below the cut line.

But Elliott kept battling, got back above the cut line, finished 12th and kept his repeat hopes alive.

“Just proud of our entire NAPA team today, they did a really, really good job of fixing this thing. It was destroyed,” Elliott said.

“Fortunately it was early enough in the race where we were able to fix it. We could have easily given up or not fixed it to the proper standard and had something break or had a tire rub so everybody just did a really good job today and I’m super proud of that.”

Not sympathizing with Harvick’s fate was Elliott.

Harvick and Elliott got in a pit-road tussle after the Bristol race three weeks ago. Harvick had wrecked Elliott in that race and Elliott retaliated by getting in front of Harvick and taking his line away. That probably cost Harvick the win as he was tracked down and passed by Larson for the lead with three laps to go.

“Not sure,” Elliott said of his run-in with Harvick Sunday. “I just want to wish him a merry offseason and a happy Christmas.”

Larson appeared all but locked into the Round of 8 when the race started as he was 22 points ahead of the cutoff. But around Lap 34, “all but” kicked in.

His alternator belt broke, which necessitated installation of a new battery. Running third at the time, he dropped back to 37th and below the Playoffs cutline. The team could not replace the belt during his stop so Larson’s new battery began to drain. But during the caution between the second and third stages, the belt was replaced and Larson’s day was saved.

He drove his way back up through the field. All the way.

“I noticed my battery was going low so I was getting stressed out,” Larson said. “I was, ‘Like man, I’m not going to get knocked out of the Playoffs like this.’ It wasn’t looking too good.”

“Thankfully, everybody on our (No.) 5 car stayed calm. Cliff (crew chief Cliff Daniels) as always, did a great job of communicating with me with what was going on, getting … the battery changed, the alternator, whatever it takes to change to get our battery running.”

Larson’s Playoffs teammate, Bowman, also started to suffer voltage drain about the same time as Larson. He fell from seventh back to 34th. By the end of Stage 2, Bowman found himself 67 points behind the cutdown line.

Bell, who started 28 points below the cutoff line, saw his chances of making up that deficit take an early hit when he was penalized for speeding on Lap 9. He would finish eighth, but that was nowhere near being enough.

Sunday’s was the seventh and final road course race on the 2021 schedule.

The Round of 8 begins next Sunday at Texas Motor Speedway in Fort Worth.