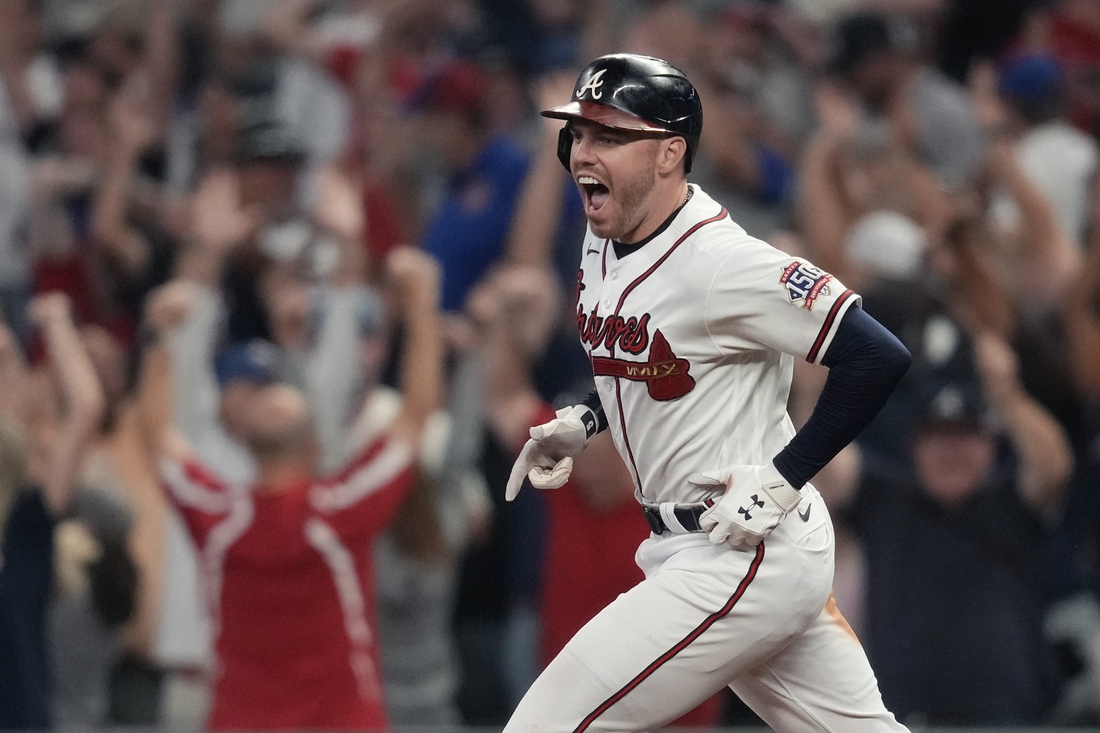 Freddie Freeman hammered a tiebreaking homer with two outs in the eighth inning to propel the Atlanta Braves to a clinching 5-4 victory over the visiting Milwaukee Brewers in Game 4 of the National League Division Series on Tuesday.

Freeman’s 428-foot blast to left-center off a slider from Brewers left-hander Josh Hader (0-1) helped the Braves win the series 3-1 and reach the NL Championship Series for the second straight season. Atlanta lost to the Los Angeles Dodgers in seven games in 2020.

He later added, “I’ve had a lot of cool moments in my career. I think it’s going to top them right here, but hopefully that’s not the last cool one and I have a couple more in these playoffs.”

Brewers manager Craig Counsell said of the Hader-Freeman matchup, “It was our best against their best, and I don’t think you regret having that situation. That’s how the game works. That’s how it’s supposed to work.”

Freeman went 3-for-5 and Eddie Rosario contributed a two-run single for the Braves, who will face either the Giants or the Dodgers in the NLCS. The San Francisco-Los Angeles NLDS is tied 2-2 after the host Dodgers won 7-2 on Tuesday night, forcing a decisive fifth game Thursday in Northern California.

Rowdy Tellez hit a two-run homer for the Brewers, who were eliminated in the playoffs for the fourth straight season.

“Like we said early on, we had a team to do some damage,” Hader said. “All we can do is just look back on what we did and how the season went, but it is what it is now.”

Tyler Matzek (1-0) pitched a flawless eighth for the Braves and fellow left-hander Will Smith worked the ninth for his third save of the series.

Milwaukee’s Eduardo Escobar led off the ninth with a pinch-hit single to center. Kolten Wong popped up on a bunt attempt before Smith struck out Willy Adames and Christian Yelich to end it.

The Braves played without Jorge Soler, who tested positive for COVID-19. He was replaced on the roster prior to the game by fellow outfielder Cristian Pache.

Atlanta third baseman Austin Riley said of the club’s ability to overcome the loss of its leadoff hitter, “It says a lot of good things about this team. That was a big hit. We’re used to it this year.”

Yelich led off the fifth inning with a single to right against Atlanta right-hander Huascar Ynoa. One out later, Tellez clobbered a first-pitch slider, and the 448-foot blast landed well beyond the center field fence to give the Brewers a 4-2 lead.

The Braves knotted the score in the bottom of the frame. Joc Pederson’s fielder’s-choice grounder with the bases loaded drove in the first run, and Travis d’Arnaud followed with an RBI ground single to right.

Braves right-hander Charlie Morton was charged with two runs and four hits over 3 1/3 innings. He struck out five and walked one.

Milwaukee left-hander Eric Lauer gave up two runs and four hits over 3 2/3 innings. He struck out two and walked two.

The game was scoreless through three innings before both teams tallied twice in the fourth.

Omar Narvaez came up with runners on first and second with one out for the Brewers and delivered a run-scoring single to center to score Avisail Garcia. Right-hander Jesse Chavez replaced Morton and was greeted by Lorenzo Cain’s RBI single to center.

Atlanta loaded the bases with two outs in the bottom of the inning. Immediately after right-hander Hunter Strickland replaced Lauer, Rosario came up as a pinch hitter and lined a tying two-run single to center.

“In the end, we had big goals. We didn’t quite get there. You win 95 games, it’s a special group and they did accomplish some special things.”