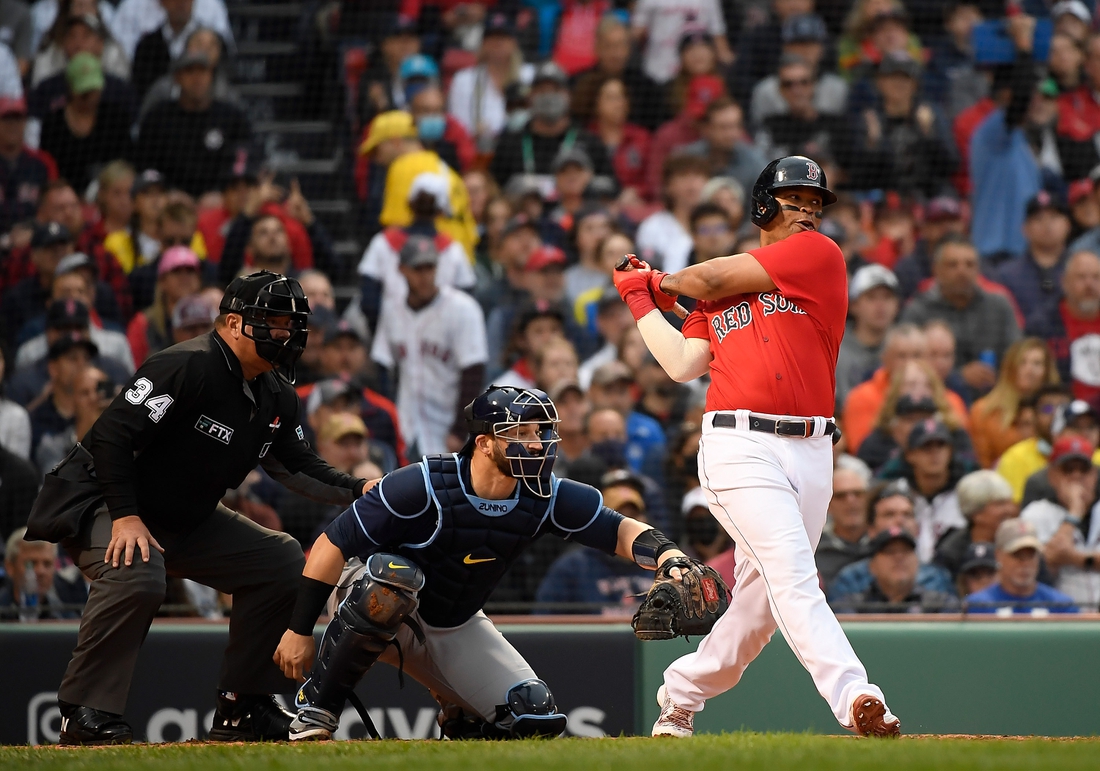 Christian Vazquez hit a two-run homer with one out in the bottom of the 13th inning as the Boston Red Sox got a walk-off win over the visiting Tampa Bay Rays 6-4 in Game 3 of their American League Division Series on Sunday.

Boston took a 2-1 lead in the series and can close out the best-of-five set in Game 4 on Monday night, also at Fenway Park. The game coincides with the twice-postponed 125th Boston Marathon, and the Red Sox traditionally host a late-morning game on the day of the Marathon.

Tampa Bay nearly took the lead in the top of the 13th after Kevin Kiermaier’s double hit off the short wall in right field and bounced over the wall after it ricocheted off the right fielder Renfroe. After a review, Kiermaier was awarded a ground-rule double — holding Yandy Diaz at third base. Diaz would have scored had the ball stayed in play.

Renfroe said he “was actually going for the catch, happened to look up, the wall was right there. … Thankfully it bounced over the fence.”

Kiermaier called the play “a heart-breaker.”

“I’m still, I’m just in awe right now,” he said right after the game. “You know, that’s the ruling. The umpires explained it to me, so I can’t go against that. The rules are what they are. But man, that’s a heartbreaker. I can’t believe that happened or we don’t get the chance to score right there.”

Boston’s Enrique Hernandez (3 for 6) hit a first-inning single, a tying RBI single in the third and a solo homer in the fifth inning, which gave him his franchise-record seventh consecutive postseason hit in as many plate appearances.

Hernandez went 5-for-6 with a solo homer and three RBIs in the Red Sox’s 14-6 win Friday in Game 2 at Tampa Bay. He became the first player to record eight hits over a two-game span during a single postseason.

Red Sox starter Nathan Eovaldi allowed two runs over five innings, giving up three hits and a walk while striking out eight to match his playoff career high set Oct. 5 in the AL wild-card win over the New York Yankees.

Meadows homered over the Rays’ bullpen in right field to put Tampa Bay up 2-0 in the first. Kyle Schwarber cut Boston’s deficit in half in the home first with his leadoff homer onto the Green Monster in left-center on Rasmussen’s second pitch of the game.

Hernandez and Rafael Devers added RBI singles in the third to put Boston ahead 3-2. After Hernandez homered in the fifth, the Rays pulled within a run on Franco’s home run to left-center to lead off the eighth.

Randy Arozarena tied it at 4-4 for Tampa Bay with his two-out double later in the inning.

“They were a swing better than us tonight when it comes down to it,” Kiermaier said. “What a great game to be a part of. I’m proud to take that field with these guys and playing such a good team over there. This is what it’s all about.”