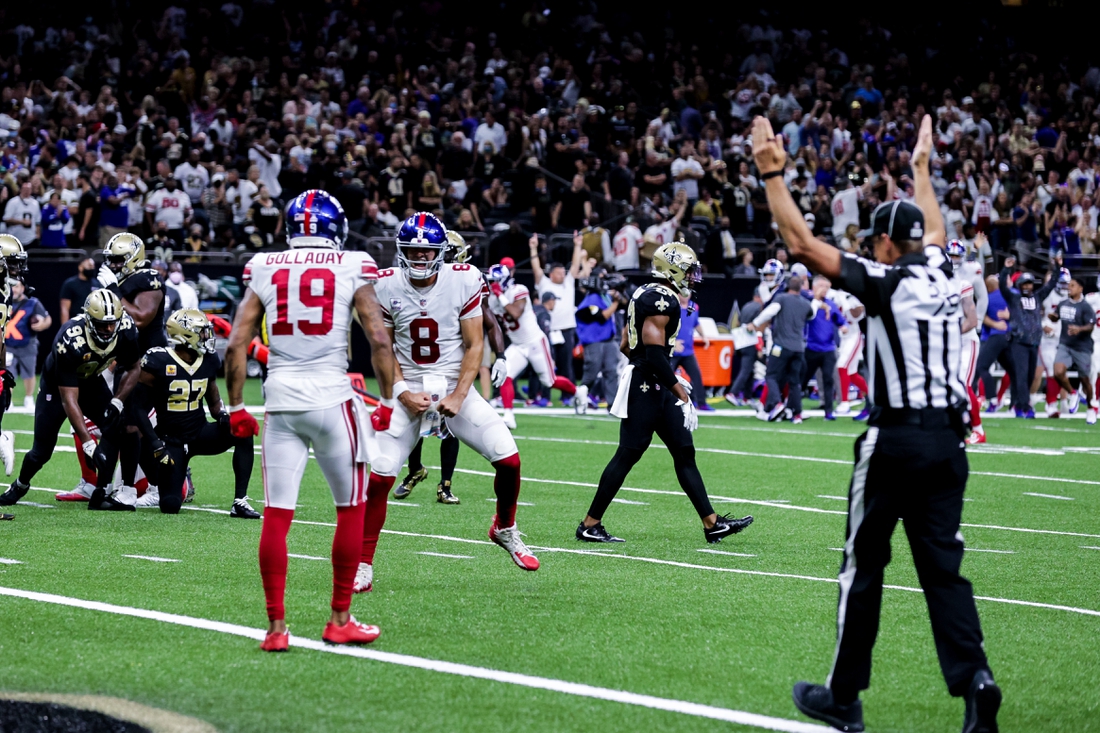 Daniel Jones passed for 402 yards and two touchdowns and Saquon Barkley scored on a 6-yard touchdown run on the first possession of overtime as the visiting New York Giants defeated the New Orleans Saints 27-21 on Sunday afternoon.

Jones completed 28 of 40 passes and led the Giants (1-3) back from an 11-point fourth-quarter deficit. New York won on the final play of the game after losing its past two games on last-second field goals by the Washington Football Team and Atlanta Falcons.

Graham Gano’s 48-yard field goal with 31 seconds left in the fourth quarter tied the score and sent the game into overtime.

Jameis Winston completed 17 of 23 pass attempts for 226 yards and a touchdown, Taysom Hill ran for two touchdowns and Alvin Kamara rushed for 120 yards on 26 carries to lead the Saints (2-2).

Winston threw a 58-yard completion to Marquez Callaway on the first play of the third quarter.

Two plays later, Hill ran 8 yards for a touchdown to give New Orleans its first lead, 14-7.

Another 8-yard touchdown run from Hill gave the Saints a 21-10 lead with 12:09 remaining in the game.

Jones threw a 54-yard touchdown pass to Barkley, and Jones ran for a two-point conversion that pulled the Giants within 21-18 with 6:52 left.

After a New Orleans punt, New York took over at its 11-yard line with 3:01 left. Jones led a drive to the Saints 31 and Gano’s tying field goal.

After a scoreless first quarter, John Ross recovered his own fumble in the end zone at the end of a 51-yard pass completion from Jones to give the Giants a 7-0 lead.

Winston threw a 15-yard touchdown pass to Juwan Johnson to tie the score at seven at halftime.

The loss spoiled the Saints’ return to the Superdome. They have played all road games and trained in Fort Worth, Texas, since Hurricane Ida slammed into Louisiana on Aug. 29.