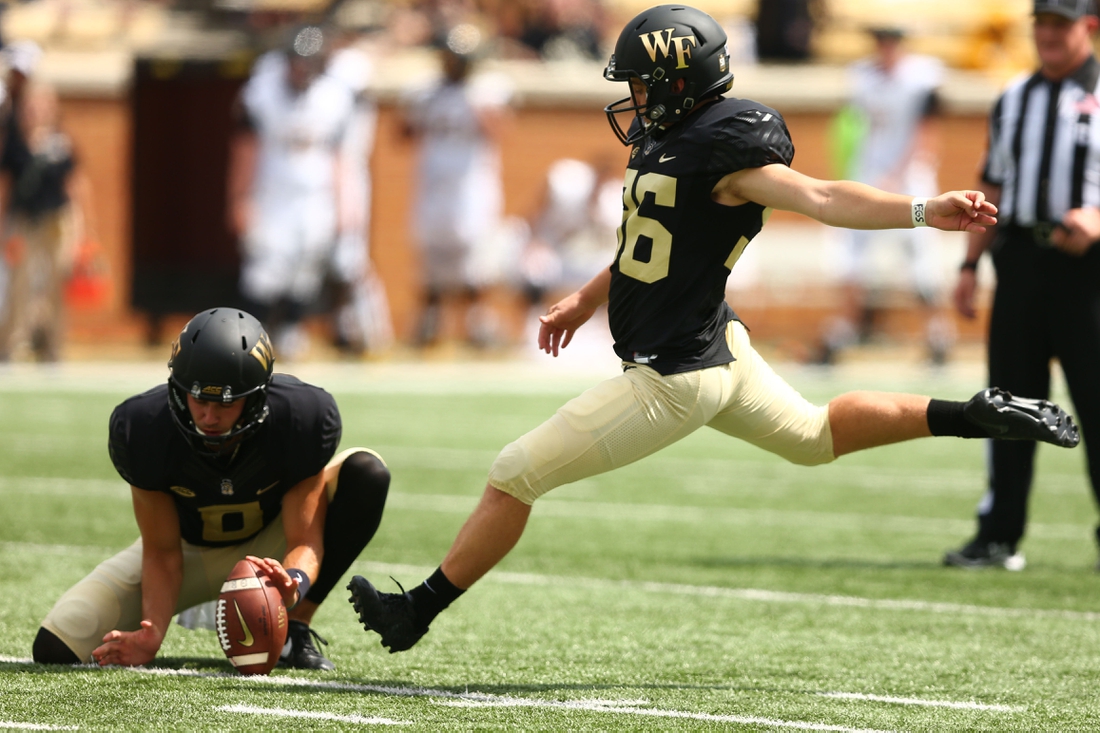 Two teams that know plenty about the importance of a field goal meet Saturday when No. 19 Wake Forest takes on host Syracuse in an Atlantic Coast Conference game.

Wake Forest (5-0, 3-0 ACC) is trying to build on one of the best starts in the program’s history.

The Demon Deacons had their only close call of the season last week, when a last-minute field goal by Nick Sciba boosted them to a 37-34 victory over visiting Louisville.

A few hours later, Syracuse (3-2, 0-1) experienced the other end of a late field goal, when host Florida State broke a tie on the game’s final play in a 33-30 decision in Tallahassee, Fla.

This marks the third year in a row that the Demon Deacons visit Syracuse, losing at the Carrier Dome 39-30 in 2019 in overtime and then winning last year 38-14.

“We’ve got basically the No. 1 team in the ACC coming into our house,” Syracuse fullback Chris Elmore said. “Wake Forest, they’re not a pushover.”

The Demon Deacons, who hold the highest national ranking among ACC teams, are 3-0 in conference play for the first time in a decade.

Sciba made three field goals in the Louisville game, pushing his career total to 67 of 74 for the highest percentage (.905) in NCAA history.

Syracuse kicker Andre Szmyt, who is 6-for-8 on field goals this season, has strong credentials as well. He was the 2018 Lou Groza Award winner as a freshman, when he led the NCAA with 30 field goals, and has made 62 of 73 of attempts in his career — an 84.9 percentage.

Significant contributions keep coming from across the Wake Forest roster. Safety Traveon Redd was the ACC Defensive Back of the Week after making 11 tackles and forcing a fumble in the Louisville game, while running back Justice Ellison was the ACC Rookie of the Week owing to his team-high 67 rushing yards. Ellison has scored a touchdown in each of the past three games.

That’s a good thing, because running back Christian Beal-Smith has been “nicked up,” Clawson said.

Quarterback Sam Hartman of Wake Forest eclipsed the 300-yard mark for passing yards for the first time this season in the Louisville game.

Quarterback Garrett Shrader tied a Syracuse record for rushing touchdowns by a quarterback with three against Florida State. It was the Mississippi State transfer’s second start with the Orange.

Syracuse is retooling a bit after Taj Harris, who had been the team’s top receiver through four games, entered the transfer portal. He didn’t play at Florida State. At least the Orange has Elmore back after he missed the first four games.

The winning team in this matchup has scored at least 38 points in four straight meetings, beginning with Wake Forest’s 64-43 road win in 2017.