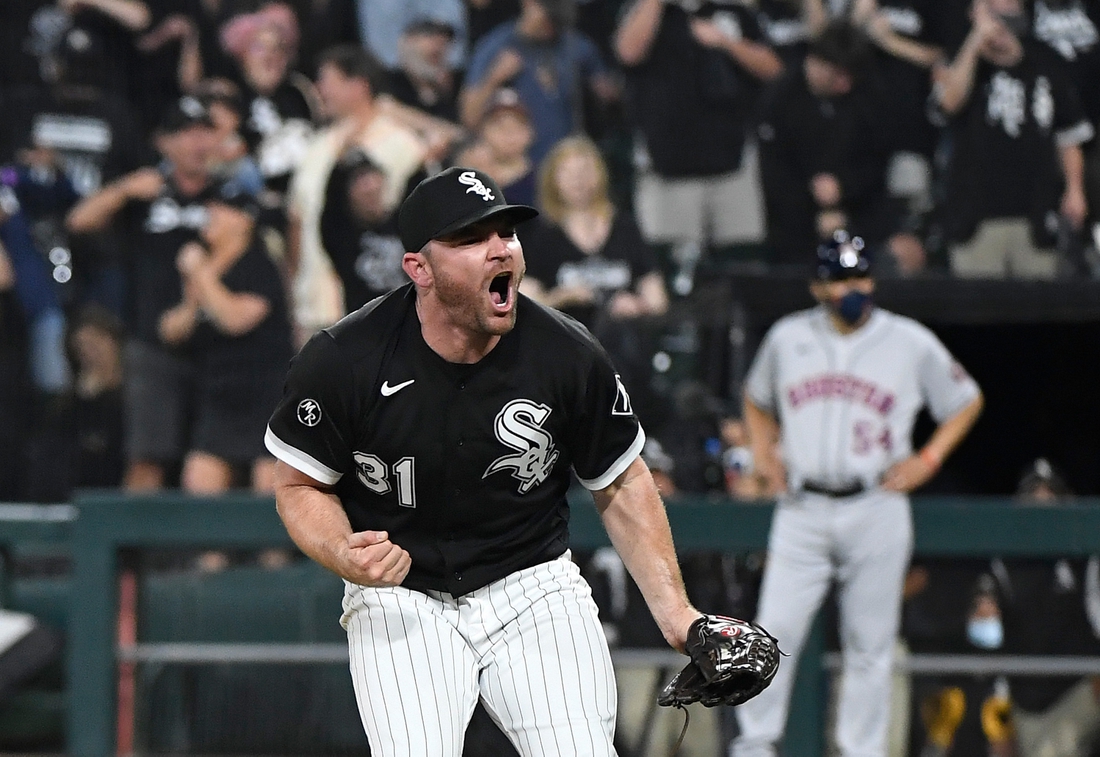 Yasmani Grandal and Leury Garcia homered as part of a five-run third inning and Eloy Jimenez had two hits and two RBIs as the host Chicago White Sox kept their season alive Sunday with a 12-6 victory against the Houston Astros in Game 3 of the teams’ AL Division Series.

The Astros lead the best-of-five series two games to one. Game 4 is Monday afternoon in Chicago.

“I feel like we got the momentum back, and that’s all we need,” Grandal said.

Chicago relievers retired the final 16 Astros in a row, as the pitching staff notched 16 strikeouts on the night.

“That’s what our strength was coming into spring training. We’ve got a great group of guys out there, and this is where it matters,” White Sox pitcher Liam Hendriks said about his team’s bullpen.

After opening the series with 20 successive singles, the White Sox delivered their first extra-base hit when Grandal connected for a two-run home run against Astros starter Luis Garcia with one out in the third inning.

That set the tone for a five-run inning punctuated by a three-run blast from Leury Garcia off Houston reliever Yimi Garcia, as the White Sox took a 6-5 lead. The Astros answered with a run in the top of the fourth, but Chicago responded just as swiftly with three runs in the bottom half.

Jose Abreu drove in the go-ahead run with an RBI single. Chicago got a valuable insurance tally one batter later, as Grandal reached on a fielder’s choice fielded by Astros first baseman Yuli Gurriel.

Gurriel threw home in an attempt to retire Luis Robert at the plate, but the ball struck Grandal as he ran toward first base, even as Grandal appeared to be well outside the baseline.

“Clearly, he was running inside,” Astros manager Dusty Baker said about the play. “I mean, that’s interference in itself. That was a big play because we didn’t get an out and they scored a run.”

White Sox starter Dylan Cease retired the Astros in order in the first inning but was unable to escape the second. Kyle Tucker delivered a two-run double and Jake Meyers had an RBI single to help chase Cease, who spaced three runs and two hits in 1 2/3 innings with three walks and two strikeouts.

Strong relief efforts for both sides kept the game close. Houston’s Cristian Javier struck out six and walked two in 2 2/3 scoreless innings. For the White Sox, Ryan Tepera struck out three in two perfect innings before Aaron Bummer retired all five men he faced, including four by strikeout.

Michael Kopech (1-0) was the winner, allowing three runs and four hits in 2 1/3 innings with one walk and five strikeouts.

Yimi Garcia (0-1) took the loss, yielding four runs and four hits in 1/3 of an inning with one strikeout.

Alex Bregman and Tucker had two hits apiece for Houston.